Nepal’s Tilganga Institute of Ophthalmology has been working to build one of the most successful corneal donation programmes in the world.

For Nepalese corneal surgeon Sanduk Ruit, the proximity of his clinic to Pashupatinath Temple in Kathmandu offered an obvious opportunity, according to the Fred Hollows Foundation.

At the temple, 800 metres from the Tilganga Institute of Ophthalmology, Hindus gather to mourn before cremating the bodies of their departed relatives on funeral pyres.

Dr Ruit dreamed of transplanting the corneas from these bodies before their cremation into his patients, the foundation reports. Birth defects, farm accidents, or untreated infections make corneal damage the second most common form of blindness in Nepal, the Foundation reports.

But “the Hindu community held firmly-entrenched beliefs that to remove any part of a corpse would mean the person would be without that body part in their next life,” according to the Foundation, a sponsor of the hospital.

Such beliefs have hampered organ donation in some other Hindus as well. The Hindu newspaper reports that health officials have encountered objections in Tamil Nadu, India.

“The negative attitude towards organ donation is driven by religious beliefs and perceived risks to the donor,” said M A Aleem, neurologist and epileptologist, according to the The Hindu.

Because of these objections, Tilganga relied instead on donated tissue from western hospitals.

“We had to fight for scraps," Dr Ruit, the hospital’s medical director, told the Fred Hollows Foundation. It reports that he would ask visiting ophthalmologists from the United States and the United Kingdom to bring corneas left over from large teaching hospitals.

So Dr Ruit began lobbying the cremator and the Hindu priests at the temple to ask families to donate their relatives’ corneas, the Fred Hollows Foundation reports, explaining the powerful benefit that the donated tissue could have on patients whose sight was impaired.

According to the BBC, Dr Ruit may have the mainstream of Hindu belief on his side. Most Hindus take the view that the body of a departed soul is “no more than a machine,” the news agency reports, citing Shaunka Rishi Das of the Oxford Centre for Vaishnava and Hindu Studies.

“It is said that the soul is invisible, inconceivable and immutable,” the Bhagvad Gita reads, in chapter 2.25. “Knowing this, you should not grieve for the body.”

According to the Hollows Foundation, Dr Ruit clinched his argument by inviting the priests and cremator to the hospital where they could witness the moment when patients first regained their vision.

That began a fruitful collaboration, making Tilganga the first eye bank in Nepal. At first only a handful of patients donated their corneas, and often the calls would come in the middle of the night. But Shankya Twyna, director of the hospital’s fledgling eye bank, would rush off to the temple on his moped, irrespective of the time, so that Tilganga’s surgeons could implant the corneas within hours.

The bank only received eight corneas in the first year, but that number grew to about 300 the following year. After 20 years, Tilganga has restored vision to more than 11,000 people through its corneal donation programme.

Tilganga now runs a small office at the funeral pyres so that it can conduct the excision in private, and it has extended the programme to the three major hospitals in the Kathmandu valley, according to the Hollows Foundation.

The future looks bright, with more than 60,000 people pledging to donate their corneas to the eye bank. The programme has been so successful that Tilganga has been able to send donated corneas to Bhutan, China, Malaysia, Pakistan, Cambodia, Bangladesh, Indonesia, Thailand, and East Timor.

Every year, the hospital holds a commemoration ceremony in the courtyard of the hospital. There, donors’ names are inscribed on a shrine and the families of the recipients lay wreaths, light candles, and give prayers of thanks to the donors and their families.

“When the families speak, they are so proud that although their relative has passed away, their corneas are still here, helping someone to see this great world of ours,” said Anil Subedi, the Foundation’s former country manager.

"At the last ceremony, one boy got up to make a speech. He was 10 when he had a cornea transplant. He's now in Year 11, and wants to become a policeman. The boy said he regards the day his bandages came off at the hospital as his birthday, because that was the day his life began.”

Dr Ruit’s contribution doesn’t end with the eye bank, according to CNN. It reports that he has personally restored the sight of more than 100,000 people in Asia and Africa, and has visited North Korea to teach a rapid technique for replacing cataracts with intraocular lenses. 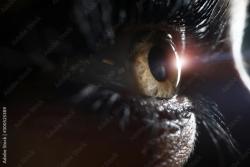