The study could lead to early diagnosis and treatment of age-related macular degeneration. 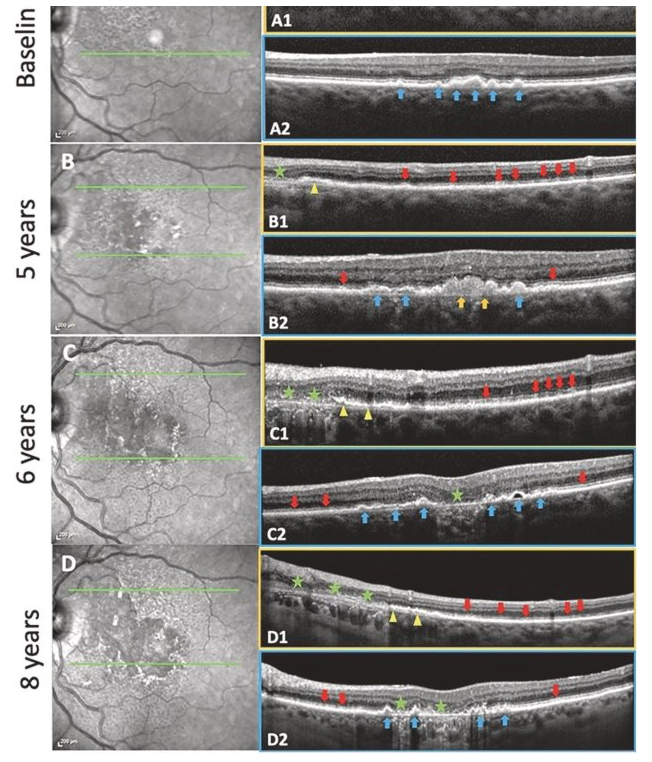 A pair of separate eye diseases may contribute to age-related macular degeneration (AMD), one of the leading causes of blindness in the United States, according to results from a new study1 from New York Eye and Ear Infirmary of Mount Sinai in New York.

According to the study results,1 the research is the first to show that 2 different types of deposits in the retina could be a key factor tearly AMD, which can progress to advanced AMD and blindness. These 2 diseases can be diagnosed, studied, and managed separately with appropriate early intervention to prevent vision loss and other complications.

New York Eye and Ear Infirmary of Mount Sinai noted in a press release2 that AMD results from damage to the central area of the retina called the macula, which is responsible for reading and driving vision. Nearly 20 million Americans 40 years or older are living with some form of AMD, according to the Centers for Disease Control and Prevention.

Currently, AMD in its early form is viewed as a single disease with cholesterol-containing deposits. Early AMD may progress to blindness in 2 advanced forms, commonly called wet and dry AMD. The advanced dry form of AMD is called geographic atrophy (GA) by eye specialists.

In the news release, lead author R. Theodore Smith, MD, PhD, pointed out that the retina can generate a fluorescent light similar to that of a light fixture but 1 million times dimmer. Smith is professor of ophthalmology at the Icahn School of Medicine at Mount Sinai in New York City, New York

“For the first time, we were able to measure this dim light, called autofluorescence (AF), with ultrasensitive detectors to study advanced AMD,” Smith said in the news release. “We found it was consistently twice as bright in the patients with SDDs as those with drusen when they reached advanced AMD, and [it] came from a unique diseased layer. Combined with our prior research, this provides conclusive evidence that 2 different disease processes in AMD are taking place, one with darker fluorescence and drusen and one with brighter fluorescence and SDDs, and they need to be [managed] differently.”

Moreover, investigators noted in the news release that drusen formation can at least be slowed down by appropriate vitamin supplements to prevent vision loss. There is no known current treatment for SDDs, and they pose a greater threat af the advancement of AMD.

However, in a recent previous study, Smith and a team of Mount Sinai researchers found that patients with SDDs are likely to have heart damage from heart failure and heart attacks, advanced heart valve disease, or strokes associated with carotid artery disease.

Smith also explained that investigators believe SDDs result from deficient blood flow to the eye due to these vascular diseases. “We therefore believe that patients with SDDs should be warned they may have life-threatening, undetected heart conditions that should be evaluated and [managed],” he explained. “Further research needs to be done in women and groups [who are economically or socially marginalized] where neglected heart disease is a serious issue

According to Smith, eye scans for SDDs and routine cholesterol blood tests could address thi

“Additionally, [managing] the cardiovascular condition and restoring the eye’s blood supply may also help the SDDs,” he said in the release. “This work should prompt retinal specialists to look for both drusen and SDDs with optical coherence tomography (OCT), a standard retinal imaging technique, to best counsel patients.”

The new research measured the autofluorescence and evaluated OCT scans in 18 patients (32 eyes) with advanced AMD and geographic atrophy (GA). Because GA can happen in multiple regions of the retina, investigators analyzed 52 GA regions overall. They also selected only patients who had OCT scans over the three previous years so they could determine whether the diseased regions started with drusen, SDDs, or both. 18 of these regions originated from drusen, 12 originated from SDDs, and 22 originated from mixtures of drusen and SDDs. The team then measured the brightness of the fluorescent light coming from these regions with a very sensitive light meter.

They found it was twice as bright in patients with SDDs when compared to those with drusen. Specifically, the brightness readings averaged 72 in SDD subjects and 36 in drusen subjects, with values in the mixed group falling in between.

“All these numbers translate into one basic fact—there are two different diseases in AMD, one with drusen and one with SDDs,” Smith noted. “The good news for patients and eye specialists is that in the clinic, we will not need advanced AF measurements to know which form of AMD the patient has. As our research showed, the two forms are associated with drusen and SDDs, and those deposits can be identified by standard retinal imaging. It therefore becomes important to diagnose which form of AMD the patient has for treatment and prevention of disease.”

This study was funded by a Regeneron Pharmaceuticals Investigator-Initiated Study, a Research to Prevent Blindness Challenge Grant, the Macula Foundation, a Bayer-Global Ophthalmology Award, and the International Council of Ophthalmology-Alcon Fellowship. It was published in the January issue of Eye.