Medical liability: How does ophthalmology weigh in?

The nation's medical liability crisis has yet to waver, according to the American Medical Association (AMA). With the addition of Massachusetts this summer, the AMA's official crisis chart is now composed of 20 states-up from 12 in 2002.

Editor's note: The issue of medical liability is top of mind for many surgeons today. In this three-part series, Ophthalmology Times explores the various aspects of medical liability as they pertain to ophthalmologists. We begin with an assessment of circumstances surrounding the ophthalmic community. Further articles will address cataract, RK, and LASIK malpractice cases that show where ophthalmologists may improve, as well as the possible use of informed consent videos.

But should ophthalmologists concern themselves with this coast-to-coast dilemma? Are their insurance premiums rising? Will they have to relocate to another state or retire prematurely? Must they curtail high-risk procedures?

"For ophthalmology, I don't think we have a crisis," said Nancey McCann, director of government relations, American Society of Cataract and Refractive Surgery, Washington, DC. "Our No. 1 issue at this point is Medicare reimbursement and scope of practice issues. Liability is a lower-tier issue for us because it is not hitting us as hard as it is hitting the high-risk specialties."

By comparison, the American College of Obstetricians and Gynecologists (ACOG) has identified 23 medical liability crisis states. An ACOG national survey showed one in seven of its fellows had stopped delivering babies because of the fear of being sued. In Dade and Broward counties in South Florida, annual premiums for ob/gyns have soared to $210,576.

Meanwhile, Massachusetts earned its "crisis state" tag after it was determined that 50% of the state's neurosurgeons, 41% of its orthopedic surgeons, 36% of its obstetricians, and 29% of its general surgeons had reduced their scope of practice because of increasing liability costs.

Rarely, however, are ophthalmologists cited as prototypical medical liability victims. In fact, data specific to ophthalmology and malpractice premiums are limited because the insurance industry has little incentive to track the specialty and often incorporates it with other less-affected classes.

"Some neurosurgeons are paying as much as $400,000 [for premiums]," McCann said. "We're not in that category. Premiums may be going up percentage-wise, but because we pay lower premiums, it's not as drastic. We support the high-risk specialties that are really lobbying hard on this. We signed on to letters and things like that. But we're not on the forefront of this fight because you don't want us on the face of this problem. We're not one of the specialties in crisis, if you will. We don't hear about this issue very much from our members."

Keeping to the schedule 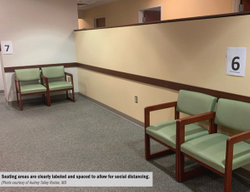 Pearls for drawing patients back to your practice