Level of evidence is decent, but may not be applicable to all racial, ethnic groups

The causes of pediatric myopia are still a mystery. While genetic factors likely play a role, the transition from outdoor activity with visual focus at ever-changing distances to close vision activities seems to be contributor. And there is growing evidence that atropine can slow progression.

Do you have a pediatric patient with myopia who is progressing rapidly? Low dose atropine may help slow progression. The literature is still small and developing, but Level I evidence suggests that atropine may slow or stop myopic progression. Side effects and rebound can be minimized by using low doses, especially 0.01%

“Myopia is becoming an epidemic as kids are becoming more and more nearsighted at a younger age than they used to,” said Stacy Pineles, MD, associate professor of ophthalmology at the Stein Eye Institute, David Geffen School of Medicine, University of California, Los Angeles.

“Not only does it mean more kids need glasses earlier in life, but myopia can lead to more serious eye diseases, including glaucoma, cataracts, retinal detachment and myopic maculopathy,” she added.

Dr. Pineles reviewed the latest data on the use of atropine to slow or stop progression of childhood myopia. She is the lead author of an AAO Ophthalmic Technology Assessment report published last year.

The OTA group found 98 citations in the literature, reviewed 23 articles and included 18 articles in its assessment. Most of the studies conducted to date have been done in Asian populations, she noted, but trials conducted in the United States in other racial and ethnic populations show similar results.

Along with cataract, glaucoma, trachoma and onchocerciasis, myopia is one of five conditions identified as an immediate priority by the World Health Organization’s Global Initiative for the Elimination of Avoidable Blindness, she noted.

Myopia remains the most common medical condition requiring treatment in developed countries. It affects about half the adult population of the United States and the pediatric prevalence has jumped from 25% to 42% over the past 30 years. Myopic maculopathy is one of the top five causes of blindness in the United States, UK, Ireland and Israel.

Rates are even higher in Asia, Dr. Pineles said. The prevalence of myopia doubled in Singapore from 1987 to 1992 and again from 1992 to 2009. Myopic maculopathy is the second most common cause of low vision in Beijing. The causes of pediatric myopia are still a mystery, she added. While genetic factors likely play a role, the transition from outdoor activity with visual focus at ever-changing distances to close vision activities such as reading, and screen use seems to be an important contributor. And there is growing evidence that atropine can slow progression once myopia is identified in certain cases.

Atropine is clearly more effective at controlling myopia in children compared to single vision lenses or placebo, Dr. Pineles noted, at least in the short term. The mechanism of action remains unclear. Early studies suggested that atropine has an effect on lens accommodation.

Later studies suggested an effect via an undetermined non-accommodative pathway in the retina or sclera. Newer theories suggest that pupillary dilation may result in increased ultraviolet A exposure, which may limit axial elongation.

Another theory suggests that myopia may be associated with increased chronic inflammation of the eye which could be down regulated by atropine. Early clinical trials in of atropine in children with myopia suggested a dose-dependent response in myopia progression versus pupil size and accommodations.

Those early findings led to trials in Singapore, Taiwan, and other countries comparing different doses against single vision and progressive lenses. Most of the trials used atropine 1%, which produced significant side effects. Problems included pupil dilation and blurred close vision. The most troubling adverse event was rebound myopia when treatment was halted.

“There was a concerted effort to create studies that evaluated lower doses of atropine that might decrease the risk of side effects and decrease the rebound effect,” Dr. Pineles said.

A 2012 trial of 400 children in Singapore, ATOM2, added atropine 0.5%. Poorer outcomes in placebo arms of earlier studies convinced researchers and review boards that continuing to include a placebo group would be unethical, so researchers added a 0.01% formulation to the trial design. The results, published in 2016, were a surprise, Dr. Pineles said.

Of the children in the 0.01% group, only 6% requested reading glasses compared to 70% in the 0.5% group and 61% in the 1% group. The very low dose group had the best balance of clinical efficacy with slightly more progression of myopia compared to the other arms but less rebound and an improved side effect profile.

“The use of atropine to slow myopic progression in children is still experimental, Dr. Pineles said. The level of evidence we have is decent but may not be applicable to all racial and ethnic groups, she said.

“We just don’t have enough results so far to know,” Dr. Pineles added.

“For now, I would keep it in mind for my patients who seem to be progressing rapidly enough that you are having concerns about them reaching a level of myopia that might be considered dangerous. We may not have perfect evidence, but it is something you can discuss with the parent.”

Stacy Pineless, MD
P: 310/267-1007
Dr. Pineles did not indicate any proprietary interest in the subject matter 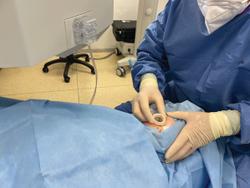