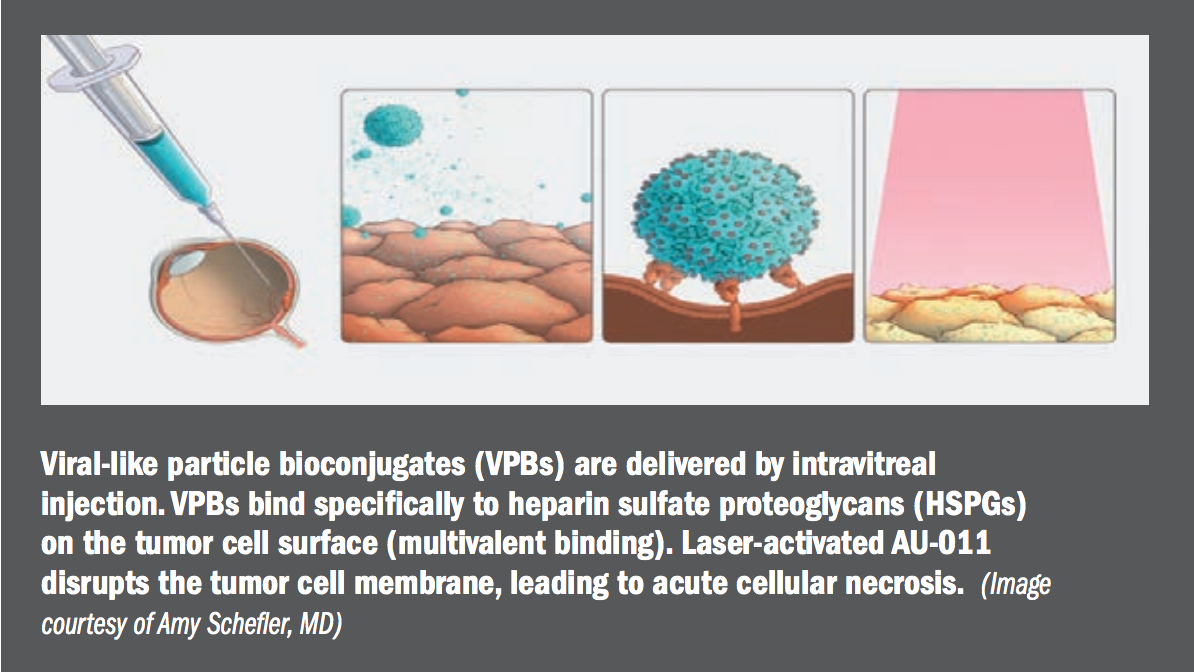 Targeted therapy could ultimately prove to be primary treatment for disease

AU-011 (Aura Biosciences) is a first-in-class drug being investigated as a treatment for choroidal melanoma with promising early results being reported from an ongoing phase Ib/II clinical trial, according to Amy Schefler, MD.

AU-011 is a bioconjugate combining recombinant viral-like particles (VLPs) derived from the human papillomavirus with a small molecule photosensitizer that is activated by 689-nm near infrared light (IR700DX).

Damage to healthy surrounding tissue is avoided because of the dual specificity of the investigational agent’s mechanism of action, Dr. Schefler explained.

“Its dual specificity and ability to cause targeted necrosis likely confers a safety advantage for AU-011 compared with brachytherapy and explains the findings that are being observed in the clinical trial regarding change in tumor thickness and vision preservation,” she said.

Safety is being investigated as the primary objective of the phase Ib/II study, which has an ascending single and repeat dose design followed by two expansion cohorts. It initially enrolled patients with small to medium choroidal melanomas that met the clinical diagnosis agreed upon with the FDA and that would have been candidates for plaque brachytherapy.

Subsequently, patients with documented tumor growth and thinner tumors were enrolled to better evaluate the safety and efficacy in a broader range of tumor sizes with early stage disease, consisting of subjects with small choroidal melanoma or high-risk melanoma suspects.

In the current cohort, which is the last cohort being enrolled, there is a requirement for documented tumor growth within the past two years. Subjects in this cohort receive two cycles of treatment at an interval of three months. Each cycle consists of three weekly intravitreal injections of AU-011; each injection is followed by two laser light applications.

A total of 46 subjects have been treated in the phase Ib/II clinical trial. Safety data show that AU-011 has been well-tolerated in the majority of subjects.

Related: Anti-VEGF injections and glaucoma: Surgeons must watch IOP elevation
The intraocular inflammation had a subacute onset, was mostly mild to moderate in severity, and resolved with topical, periocular, or oral steroid treatment.

There was one serious adverse event (SAE) involving acute severe vision loss from pigmentary changes at the edge of the tumor in the area of laser treatment involving the fovea.

“The protocol for laser application was modified after this event to deliver only one laser spot in the foveal area per treatment, and there have been no other cases of acute vision loss since,” Dr. Schefler said.

Preservation of visual acuity is being analyzed as a secondary outcome measure.

“One of the major goals of this treatment is to avoid the vision loss that can occur using brachytherapy to treat tumors located in the fovea and other critical areas,” Dr. Schefler said. During available follow-up that reaches up to two years, vision loss (≥ 15 ETDRS letters) occurred in three subjects, including the subject with the SAE mentioned above and two subjects who developed subretinal fluid in the fovea.

Vision was preserved in greater than 90% of subjects treated at all doses who did not require rescue with standard of care including those subjects who have received one or two cycles at a full therapeutic dose of AU-011. These subjects were otherwise candidates for brachytherapy and avoided the vision loss and comorbidities of radioactive treatments.

Tumor thickness is being analyzed as a measure of tumor control and has remained stable over time.

“The reason why the majority of tumors are stable but do not shrink significantly as is seen in some cases with brachytherapy is not completely understood. Probably, however, it is because the treatment targets only the tumor cells, which in early stage disease is a small component of the overall lesion, and not the healthy surrounding tissues,” Dr. Schefler said. “In addition, acute cellular necrosis is a pro-inflammatory type of cell death and the area of necrosis undergoes fibrosis that will replace a large component of the dead tumor cells.”
â
Related: Casting a net to diagnose, treat cancerous lesions

Tumor control, defined as change in tumor height ≤ 0.5 mm and in LBD ≤ 1 mm, is currently achieved in 80% to 90% of subjects who received one or two cycles at a therapeutic dose of AU-011.

“The tumor control rate is similar to that achieved with brachytherapy historically, and considering the expected natural history for the subgroup of patients with documented rapid tumor growth, the treatment appears to be having a significant biological impact,” Dr. Schefler said. “However, the follow-up duration for subjects treated at a therapeutic dose is still short, averaging just 5.6 months, and longer term follow-up is needed.”

Future plans
Aura Biosciences has executed a licensing agreement with Clearside Biomedical to use the latter company’s suprachoroidal delivery system (SCS Microinjector). This delivery to the posterior segment of the eye has shown excellent results in pre-clinical animal models of ocular melanoma.

Aura expects to initiate clinical testing using suprachoroidal delivery for AU-011 during the first half of 2020.

According to Dr. Schefler, suprachoroidal delivery makes sense for this treatment because the tumor is located in the choroid.

“Ideally, the suprachoroidal injection would allow for delivery of a higher concentration of the drug to the tumor that might allow treatment of a broader range of tumors, use of a lower dose for greater safety and the possibility of optimizing the treatment regimen by reducing the time to laser and the number of injections,” she concluded.