Fort Lauderdale, FL-Intravenous squalamine lactate being developed by Geneara Corp. shows promise as a safe and effective treatment for choroidal neovascularization (CNV) associated with age-related macular degeneration (AMD), according toresults of a phase I/II trial presented by Charles A. Garcia, MD, at the annual meeting of the Association for Research in Vision and Ophthalmology.

The study enrolled 40 patients aged 51 to 92 years old (mean 73) with angiographically confirmed classic (45%) or occult (55%) CNV. After a baseline visit, subjects received four intravenous infusions of squalamine lactate 25 or 50 mg/m2 at weeks 1, 2, 3, and 4, and then they were followed at 2 and 4 months after the last treatment.

The study was designed primarily to assess safety. Those evaluations showed mild-to-moderate injection site reactions and were the most common adverse event, but no cardiovascular, hematologic, biochemical, liver function, or ophthalmic safety concerns emerged.

No patient lost more than 2 lines of ETDRS visual acuity, and 26% experienced improvement of 3 or more lines, including one patient who benefited with a gain of 8 lines from a baseline level of 20/125 to 20/20. Vessel leakage and subretinal blood were reduced early as well, and those benefits also were maintained in some cases.

Enrollment in a phase II clinical trial of squalamine treatment for the wet form of AMD began in the beginning of May.

A first step "There has been substantial preclinical investigation of squalamine lactate, but so far only very limited human exposure. These findings represent a very encouraging, but tiny first step in the investigation of this promising new treatment for AMD," said Dr. Garcia, study advisor, and Bernice Weingarten Distinguished Professor of Ophthalmology and Visual Science, University of Texas Health Science Center, Houston.

Squalamine lactate is a novel, well-characterized synthetic small molecule that is thought to act via multiple mechanisms as an anti-angiogenic compound. In addition, it has a long intracellular half-life that allows for intermittent dosing.

Squalamine enters the endothelial cell selectively through membrane caveolae uptake, and then binds with calmodulin. The calmodulin-squalamine complex is transported to the perinuclear membrane compartment where it renders the cell less active.

The patients enrolled in the phase I/II AMD trial were required to be Ž 50 years of age and have a best-corrected visual acuity (BCVA) between 20/40 and 20/200 with a greatest lesional diameter size < 5,400 µm. Less than 50% of the visible CNV could be covered with blood, and geographic atrophy or disciform scar could not be > 0.5 disc areas in total or within 500 µm of the center of the macula.

The drug was originally planned to be infused over 90 or 180 minutes, although later in the study, the infusion time was decreased to 45 minutes.

Visual acuity assessments showed that at 2 weeks, 25% of eyes benefited with a 3 line or greater improvement in visual acuity. That percentage increased to 33% by 4 weeks, remained at that level at 2 months despite treatment cessation, and fell slightly to 25% at 4 months. Vision was stable, defined as no change to • 2 lines of improvement, in 72% of eyes at 4 weeks, 67% at 2 months, and 75% at last follow-up.

Injection site pain, in some cases associated with phlebitis, occurred in about one-third of the patients and was mild-to-moderate in severity. Lowering the concentration of 0.25 mg/ml was found to be an effective strategy for avoiding injection site adverse events. 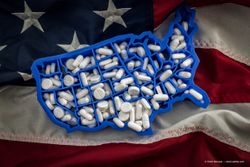