Results from the Infant Aphakia Treatment Study (IATS) of outcomes after unilateral cataract surgery during early infancy show no significant difference in median visual acuity at 4.5 years of age between children who underwent primary IOL implantation and those who received a contact lens to correct aphakia.

However, significantly more patients managed with a contact lens achieved an excellent visual outcome (better than 20/40), while the rate of complications/adverse events and need for re-treatment was significantly higher in the primary IOL group.

These outcomes support leaving the eye aphakic after unilateral cataract surgery as a general approach, but simultaneously underscore the importance of individualizing the decision-taking into account the ability of the family to maintain the child in a contact lens, said IATS investigators.

“The IATS group concluded that for most children who undergo unilateral cataract surgery prior to 7 months of age, it is better to leave the eye aphakic because the visual outcome with a contact lens is just as good as with primary IOL implantation and it seems to reduce the need for additional operations,” said Scott R. Lambert, MD, national chairman of IATS and R. Howard Dobbs Professor of Ophthalmology and Pediatrics, Emory University School of Medicine, Atlanta. “However, we also felt this should not be a universal recommendation because it is also important to take into account such factors as the family’s ability to afford and manage contact lens wear.”

“In addition, considering cost, climate, and hygiene issues, the recommendation favoring contact lens wear would not apply to refractive management after cataract surgery for children in underdeveloped countries,” he said.

David A. Plager, MD, noted he was pleased that the IATS outcomes support flexibility in management decisions.

“I do not think it is unsatisfying that the final recommendation did not definitively favor one method over another,” said Dr. Plager, professor of ophthalmology, and director, pediatric ophthalmology and adult strabismus, Glick Eye Institute, Indiana University, Indianapolis. “The fact is that IATS found children can do well whether they are left aphakic or receive a primary IOL and that both methods have advantages and disadvantages. Therefore, the decision should be individualized based on each family’s situation and desires.

“Primary IOL implantation comes at a cost of an increased likelihood of complications and needing additional surgery,” he said. “However, it eliminates having to deal with contact lens wear, which may be worth something to the family and more to some families than others.”

IATS enrolled 114 infants ages 1 to 6 months at 12 study sites. Results from analyses of data collected through 1 year after surgery were reported previously. The current report presents visual acuity outcomes measured at age 4.5 years and clinical findings through age 5. Only one patient was lost to follow-up and did not complete the final evaluations.

At age 4.5 years, median logMAR visual acuity was 0.90 in both treatment groups. While an identical proportion of patients in both groups had visual acuity of 20/200 or worse (49%), twice as many children were randomly assigned to contact lens wear compared with the IOL group attained better than 20/40 visual acuity (23% versus 11%, respectively).

Dr. Lambert noted that other studies have reported better visual acuity outcomes in children who underwent unilateral cataract surgery during infancy. However, he pointed out there may have been some selection bias in those studies that were not randomized controlled trials.

In addition, the analyses in the other studies are based on variable durations of follow-up and only include data for patients who had good compliance with patching.

“IATS was very carefully done,” Dr. Lambert said. “Visual acuity was determined by a traveling masked examiner, and we had follow-up to the final visit for 99% of patients. Therefore, we believe the results of IATS are a more realistic representation of what might be achieved in actual clinical practice.

“However, it should also be recognized that patients in IATS received glasses, contact lenses, and patches free of charge,” he continued. “Therefore, the outcomes our patients achieved might be better than those of children in the real-world.”

As reported previously, intraoperative complications were significantly more common in the IOL group than in the children left aphakic (28% versus 11%).

In addition, the IOL group experienced significantly more adverse events during the first year after surgery than the patients wearing a contact lens (77% versus 25%) as well as a significantly greater need for additional intraocular surgery (63% versus 12%).

The most common adverse events in the IOL group were lens re-proliferation into the visual axis and pupillary membrane development, and most of those events occurred during the first year of the study. In the contact lens group, the most common adverse events during the last 4 years of the study were contact lens-related issues, including corneal ulcers and abrasions, none of which permanently affected visual acuity. Glaucoma occurred at nearly equal rates in the two groups.

“It is important to note that although the IOL group had a higher rate of adverse events, very few were vision threatening,” Dr. Plager said. “They may have required additional surgery or some other intervention, but they did not result in permanent visual loss.”

Currently, the IATS investigators are trying to obtain additional funding to support follow-up for another eye examination when children reach age 10 years. A visit at this time will be past the amblyogenic period and allow a more accurate assessment of visual acuity and ocular health between study groups.

Other differences between groups may also emerge over time. One consideration is that an IOL implanted at the time of cataract surgery can usually be placed securely in the capsular bag, whereas in a secondary procedure, the IOL is frequently implanted in the sulcus.

“The capsular bag is probably the best place for an IOL to be when it may remain in the eye for 80 to 90 years,” Dr. Plager said.

On the other hand, power determination for an IOL implanted during infancy is a persisting challenge since there is no way to accurately predict refractive error after maturation.

“Although we are getting better with power selection for IOL implantation after pediatric cataract surgery on average, the fact remains that we are not any better at predicting the outliers who will not be average,” Dr. Plager said. “During IATS, three children underwent IOL exchange before age 5 because their refractive error had changed so much, and probably more of the children in the primary IOL group will need to undergo IOL exchange in the coming years as their eye continues to grow.”

“One advantage of leaving the eye aphakic initially is that we can probably be more accurate in selecting the appropriate power for an IOL that is implanted later in life,” he concluded.

Scott R. Lambert, MD, and David A. Plager, MD, presented the visual acuity and safety data from the Infant Aphakia Treatment Study at the International Congenital Cataract Symposium in New York in March. 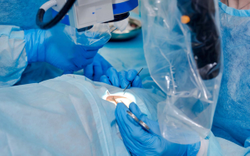 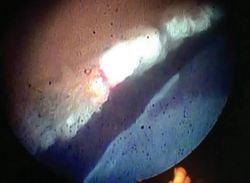 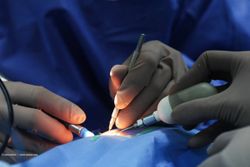