A retrospective study analyzed outcomes of 345 consecutive eyes with the proprietary glaucoma minishunt (Ex-PRESS, Optonol) implanted, including 114 eyes having combined cataract surgery. During a mean follow-up of about 2 years, the implant provided effective IOP control whether used alone or in a combination procedure and was associated with few complications.

The analyses pooled data from patients treated at the University of Tennessee and encompassed 231 consecutive eyes of 200 patients who had implant surgery alone and 114 eyes of 100 patients with visually significant cataract who underwent a combined procedure. Mean follow-up was about 2 years in both groups with a range up to 46 months.

Among both patients who had the implant alone and those with a combined procedure, mean IOP was significantly reduced from baseline beginning at 2 weeks after surgery and at all subsequent time points through 42 months (except at 30 months in the combined group), and this IOP reduction was accompanied by a significant reduction in glaucoma medication use.

The most common device-related complication was tube blockage. It occurred in only six eyes (1.7%), however, and was resolved in all cases using the Nd:YAG laser at a low setting (1 to 2 mJ) to remove the obstruction from the tube tip. 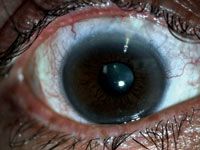 "Our data also highlight that the mini-shunt is effective used alone or combined with cataract surgery and that placement under a scleral flap is a safer alternative than implantation directly under the conjunctiva. Increased intraoperative efficiency, more predictable postoperative course, and less postoperative inflammation are potential advantages of the technique that were not directly analyzed in this study," he continued.

Dr. Netland and Steven R. Sarkisian Jr., MD, performed all of the surgeries. Dr. Sarkisian is now at Dean McGee Eye Institute, Oklahoma City. Mitomycin-C was used intraoperatively in all cases, and three different implant models (T-50, R-50, X-50) were represented in the series, based on product availability, over the course of the study period.

IOP and glaucoma medication data were analyzed from 12 follow-up intervals ranging from 2 weeks to 42 months.

Mean medication use was reduced to 1.0 in both groups at 42 months.

"These between-group differences are similar to what has been seen when comparing eyes that had trabeculectomy only versus trabeculectomy combined with cataract surgery and reflect the lower baseline IOP in the combined group but also presumably an effect of the cataract procedure on the glaucoma surgery," Dr. Netland said. "Nevertheless, we can still say with confidence that this device works well in combination surgery."

Complications were similar in the two study groups with respect to both type and incidence. Aside from tube blockage, complications included hypotony in the first week in 45 eyes (13.0%), but all cases resolved spontaneously without any eyes developing a flat anterior chamber.

A single choroidal hemorrhage, one exposed implant, and one dislocated implant were reported.

"With the original surgical technique in which the implant was placed under the conjunctiva, rates of erosion and hypotony were much higher. Our series demonstrates the scleral flap placement is much safer. This benefit is being generally recognized in the surgical community and is now recommended by the manufacturer," Dr. Netland said.

He noted that although the mini-shunt is being widely used for primary glaucoma surgery, drainage implants (such as the Ahmed, Baerveldt, and Molteno implants) still are preferred for eyes with refractory glaucoma. In addition, eyes with chronic inflammation and young age currently represent relative contraindications due to concern of an increased risk of tube blockage in inflamed eyes and the lack of data on long-term biocompatibility.

The results of the retrospective study have been published in the Journal of Glaucoma.