Fort Lauderdale, FL—Results from a preclinical study indicate that fluoroquinolones available for ophthalmic use may differ in their effects on corneal healing, said Luis E. Fern?ndez de Castro, MD, at the annual meeting of the Association for Research in Vision and Ophthalmology.

The study was conducted at the Magill Research Center for Vision Correction, Storm Eye Institute, Medical University of South Carolina, Charleston, where Dr. Fernández de Castro is a research instructor.

A total of 36 New Zealand white rabbits were divided into six treatment groups. All animals underwent an 8-mm anterior keratectomy in both eyes and then received four times daily treatment for 5 days with one of five different ophthalmic fluoroquinolones or balanced salt solution (BSS).

"Surgical prophylaxis is an essential component of cataract and refractive surgery in order to avoid potentially devastating complications," Dr. Fernández de Castro said. "However, it is important that any prophylactic treatment not interfere with natural corneal wound healing.

While all topical antibiotics used for surgical prophylaxis have been associated with some degree of toxicity to the corneal epithelium, the researchers were interested in characterizing the effects of the older fluoroquinolones (ciprofloxacin, ofloxacin, and levofloxacin) relative to the fourth-generation agents moxifloxacin and gatifloxacin, which are being advocated for prophylaxis because of their greater antimicrobial potency and reduced association with resistance.

To minimize potential confounding, all animals included in the study had similar characteristics (age, gender, and weight) and all of the outcome assessments were made in a masked fashion. Wound healing rates were determined by analyzing slit-lamp microphotographs of fluorescein-stained eyes taken twice daily beginning at 24 hours after anterior keratectomy. Those studies showed that all wounds healed in a symmetric fashion and with a decrease in wound radius that was constant over time. 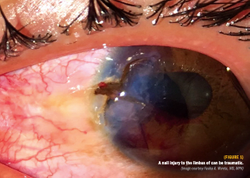 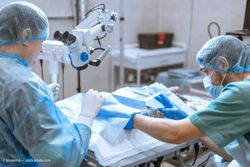