At the 22nd EURETINA World Congress in Hamburg, Germany,Isabelle Audo, MD, reported that voretigene neparvovec used to treat patients with a RPE65-related inherited retinal dystrophy, showed good safety and efficacy at the 1-year time point of the LIGHT Study.

Audo is professor of ophthalmology in the Department of Genetics at Institut de la Vision, and coordinator of the National rare disease center at Centre Hospitalier National d'Ophtalmologie des Quinze-Vingts, Paris. She presented data at the 22nd European Society of Retina Specialists (EURETINA) Congress in Hamburg, Germany.

Mutations in the RPE65 gene and loss of gene function causes photoreceptor dysfunction and degeneration, leading to blindness. VN is the first gene therapy for this patient population.

The LIGHT study, Audo described, is a descriptive, non-interventional study in which VN was administered at a dose of 1.5 x 1011 vector genomes that were delivered in a total subretinal volume of 0.3 ml.

Both eyes of the patients were treated on separate days and at least 6 days apart. Follow-up examinations were conducted at 1, 3, 6, 12 and 24 months following gene therapy in the second eye. At these time points, the investigators evaluated the treatment efficacy and safety and collected the patients’ postoperative experience.

The efficacy was assessed by measuring the visual acuity (VA), full-field stimulus threshold (FST), and visual fields (VF). A maze platform was used that showed a typical street that patients may encounter during daily activities. Patients were instructed to follow the path under four lighting conditions of 2, 7.5, 50, and 500 lux and avoid obstacles and walls. Their mobility was assessed using the percentage of preferred walking speed and the time to completion of the course completion time.

The investigators also collected patient/parent comments about the visual experience.

Eleven had a diagnosis of Leber congenital amaurosis and one had retinitis pigmentosa. All have undergone bilateral surgeries.

At the 1-month evaluation, Audo noted that the FST had median decrease of -33.2 decibels (dB) (-33.7; -19.8) dB, which remained stable until the last assessment. The VFs and VAs did not change significantly.

“This experience with VN showed significant post-treatment improvements in FST from month 1,” Audo explained. “Adding a mobility test to assess the evolution of functional vision in their routine follow-up protocol in addition to the FST allows this study to gain further insight into the efficacy of VN during the first postoperative year.”

Audo also pointed out that the patients’ mobility also improved from the first month after surgery for all patients.”

She also mentioned that in the 5 patients in which chorioretinal atrophy developed after VN treatment, the FST improved compared to baseline and remained stable over the long-term follow-up (between 12 and 24 months post VN treatment). 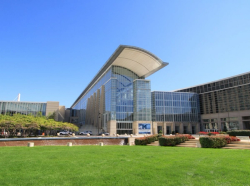