Photorefractive intrastromal cross-linking is being developed for non-invasive correction of low refractive errors.

Photorefractive intrastromal cross-linking (PiXL) performed with topically applied riboflavin solution and ultraviolet A (UVA) irradiation is a promising technique for non-invasive refractive correction, according to investigators. 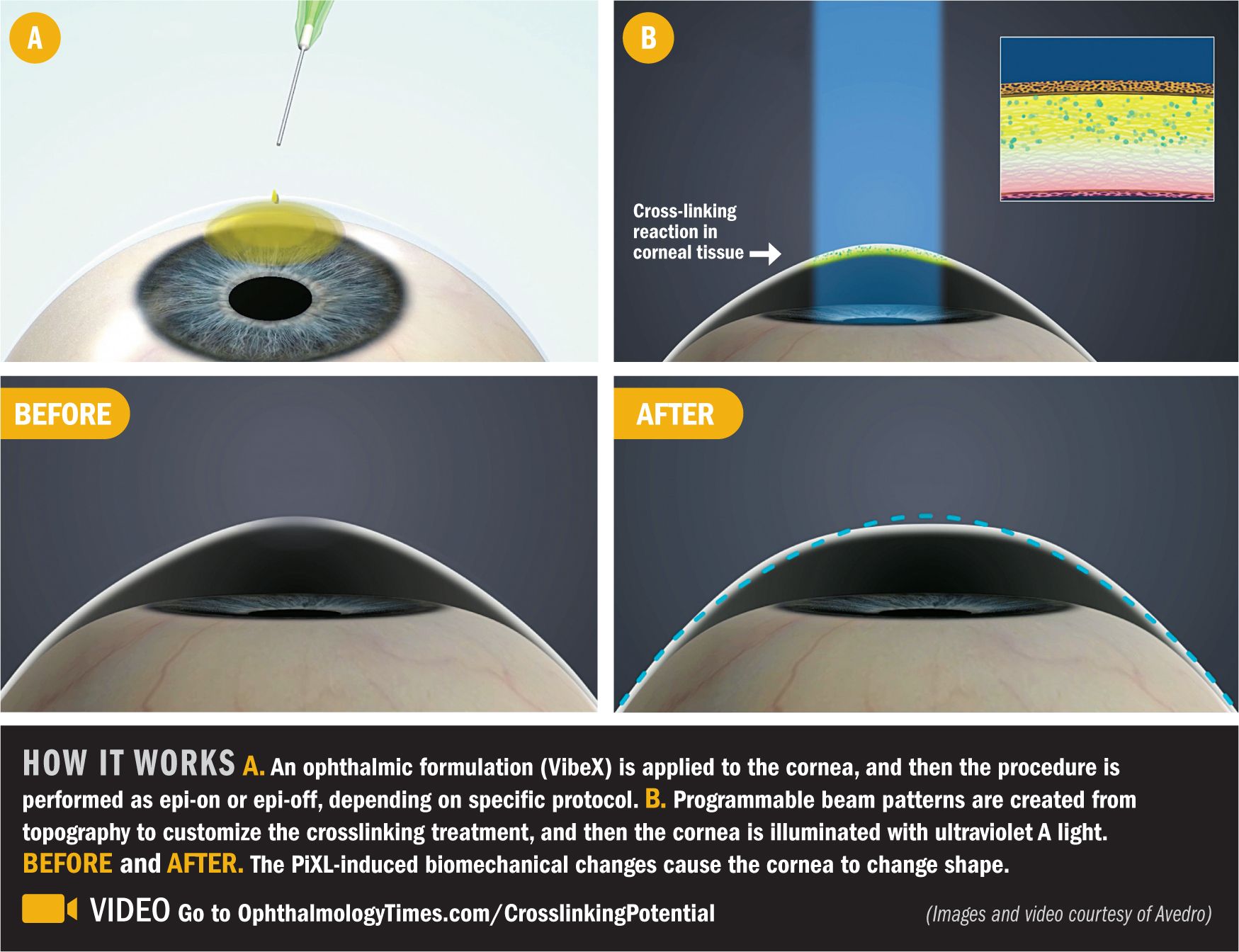 Results from analyses of small series of eyes show that PiXL reduced myopia by about 0.75 D, and in experience that is even more limited, it corrected up to +1.0 D of hyperopia.

The procedure was not associated with any safety issues, and the refractive effect has been stable during follow-up periods ranging from 9 months to 1 year after myopic corrections, said Matthias Elling, MD, and Lim Wee Kiak, MD.

Rajesh Rajpal, MD, a cornea specialist in private practice and chief medical officer, Avedro, explained, “PiXL has exciting potential as a refractive procedure because it could appeal to a large group of individuals who would be interested in reducing their spectacle dependence but who consider excimer laser vision correction or a small incision lenticule extraction procedure too invasive and too risky.

“PiXL has received the CE mark, and it is available in other countries such as Canada, Australia and Singapore,” he said. “However, Avedro is continuing to work with doctors to refine and improve the procedure.”

PiXL is being developed as an epithelium-on procedure using riboflavin products able to penetrate through an intact epithelium and the Mosaic System (Avedro) UVA device that offers topography-guided treatment patterns along with programmable, customizable illumination patterns and real-time eye tracking. It applies the corneal flattening effect of corneal cross-linking to reduce refractive error. Myopia is reduced by restricting crosslinking to the central portion of the cornea, whereas a more peripheral doughnut-shaped treatment is used to reduce hyperopia.

He analyzed outcomes for a series of 39 eyes of 20 patients (19 phakic patients who had bilateral treatment and 1 pseudophakic eye). Eligible patients had logMAR BCVA ≥0.6, up to –0.75 D cylinder, and pachymetry ≥475 μm.

“Pseudophakic eyes have to be at least 3 months post-cataract surgery and have a posterior chamber, UV filtering IOL,” he said.

Epithelium was removed with a hockey knife over a 5 mm zone. Then, the riboflavin solution was delivered over 10 minutes and rinsed away prior to UVA irradiation. The light was delivered over a 4 mm zone centered on the cornea vertex using a dose of 10 J/cm2 for eyes with MRSE -1.00 to -1.75 D and 15 J/cm2 for MRSE -2.00 to -3.00 D.

UCVA was already improved by 1 week after surgery and continued to improve over time. At 12 months, mean logMAR UCVA was 0.0. At 3 months, the eyes treated with the higher UVA dose gained an average of 25 letters and eyes treated with 10 J/cm2 gained an average of 17 letters. Mean change in refraction from baseline to 6 months was 1.375 D for the 15 J/cm2 group and 1.0 D for the 10 J/cm2 group.

“The rate of spectacle independence was very high as was patient satisfaction,” Dr. Elling said.

He subsequently switched to an epithelium-on procedure, which he believes is best suited for PiXL if it is to compete with conventional refractive surgery procedures.

“The epithelium-on technique is more comfortable, has essentially no downtime, and allows for faster visual recovery. The amount of refractive change achieved is less with the epi-on versus epi-off procedure, but it is expected that the treatment effect can be increased by using supplemental oxygen,” Dr. Elling said. 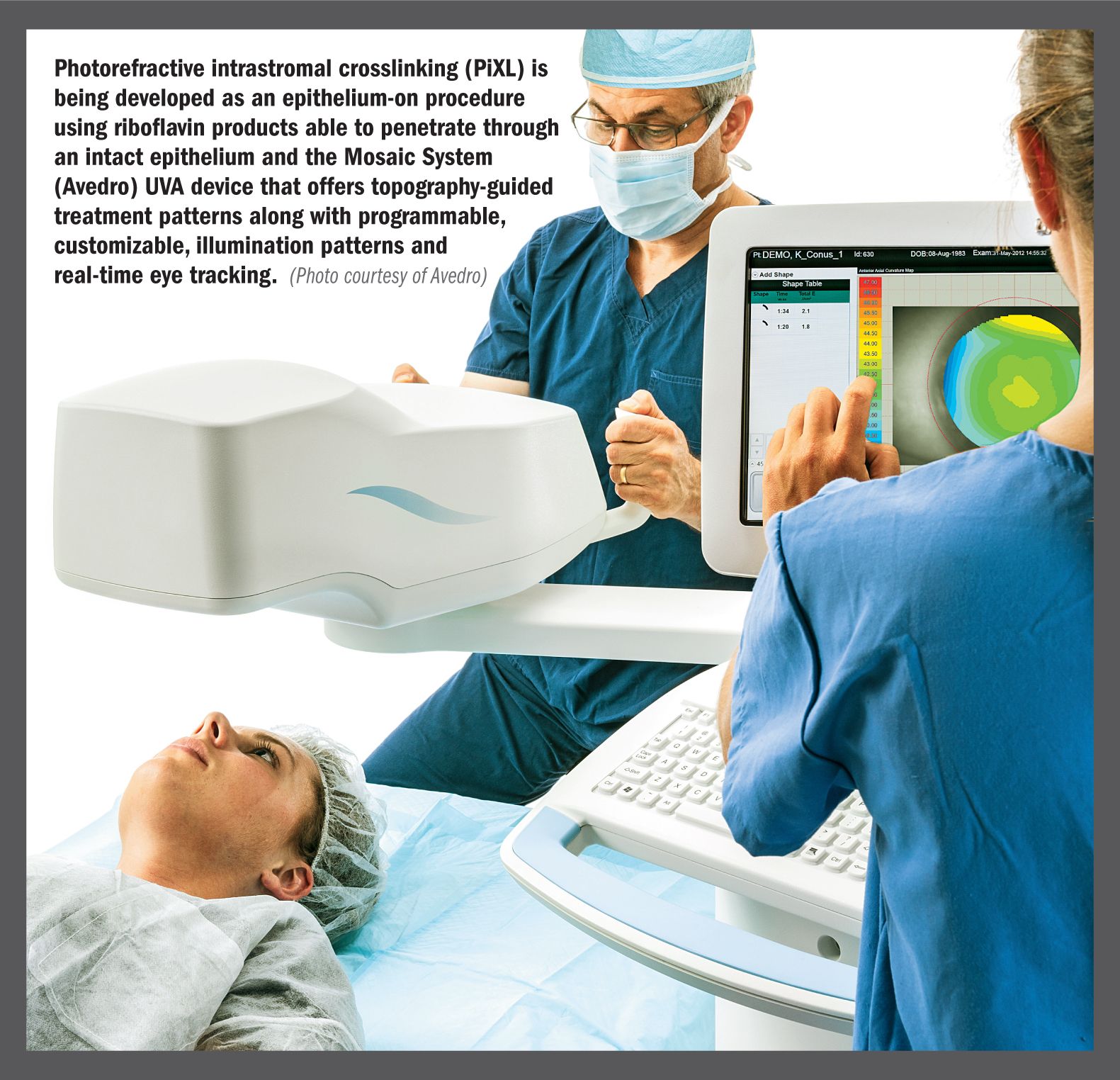 At the Eagle Eye Centre, Singapore, Dr. Lim has been performing epithelium-on PiXL and analyzed data from 14 eyes of 8 patients followed to 9 months. Baseline myopia for the series ranged from -0.75 D to -2.625 D (mean -1.62 D). 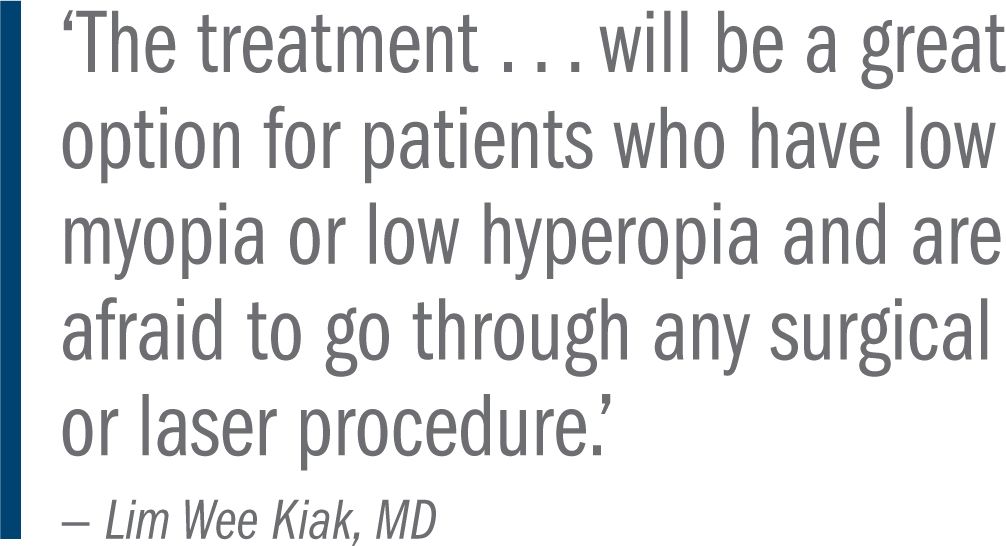 All treatments were done at a 4.5 mm zone. Eyes were treated with one drop of the photoenhancing product containing riboflavin 0.25%, HPMC, and benzalkonium chloride (ParaCel, Avedro) every 90 seconds for 4 minutes, irrigated and then treated for another 6 minutes with one drop of 0.22% riboflavin in isotonic saline (VibeX Xtra, Avedro) every 90 seconds for 6 minutes.

After rinsing, UVA light was delivered with pulsed illumination (1 second on, 2 seconds off) at a fluence of 45 mW/cm2. The total UV energy delivered was 10 or 15 J/cm2 according to the level of spherical error.

Patients also completed a questionnaire at 9 months, and five (62.5%) of the eight patients rated themselves as satisfied overall. Six (75%) patients reported freedom from glasses during the day and five (62.5%) said they were spectacle-independent at night. Five patients (62.5%) reported no photic phenomenon and six (75%) said they had no vision fluctuation.

Data collected by both Dr. Lim and Dr. Elling show no significant changes in endothelial cell count, central corneal thickness, or BCVA at last follow-up, and there have been no cases of infection or significant corneal haze. Half of the patients in Dr. Lim’s series reported moderate to severe dry eyes. Dr. Elling also noted that some patients develop dry eye symptoms, which are transient.

Both Dr. Lim and Dr. Elling expressed optimism about the opportunity that PiXL offers as a non-invasive, no-laser, no-cut procedure.

“The treatment range for PiXL is limited, but it will be a great option for patients who have low myopia or low hyperopia and are afraid to go through any surgical or laser procedure,” Dr. Lim said. “I also believe it has potential as an enhancement technique for correcting low residual refractive error present after cataract surgery or any refractive procedures.”

However, further work is needed to refine the treatment algorithm and to understand its long-term stability, he noted. 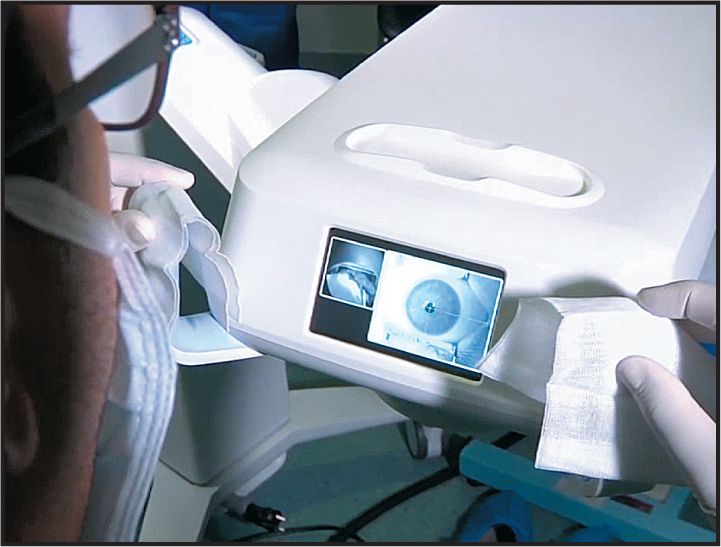 Dr. Elling also believes that because it allows refractive correction without tissue removal, PiXL is a very good alternative to excimer laser vision correction procedures for patients with low myopia who do not want “real” surgery.

“When I discuss PiXL with patients, I talk about it as a treatment rather than as surgery,” Dr. Elling said.

He observed that compared with other refractive procedures, PiXL has attributes that should make it attractive for adoption by clinicians.

“Surgeons can expect a short-learning phase with PiXL because no intensive training is needed to develop expertise,” Dr. Elling said. “In addition, treatment planning is easy, and the Mosaic System software is very intuitive.”

“The flattening effect of crosslinking can vary in eyes with keratoconus as a result of differences in tensile strength,” Dr. Rajpal said. “That variability is probably not an issue in healthy normal eyes, but perhaps there may be an age-related effect considering that natural crosslinking increases with age.

“Currently, it is made clear when discussing PiXL with patients that while the procedure can reduce myopic error and improve visual acuity, the level of correction achieved cannot be predicted with high accuracy,” Dr. Rajpal added. “Therefore, all patients are also offered the option of subsequent treatment with PRK.”

The potential to increase the refractive effect of PiXL with supplemental oxygen is also being evaluated. Further study is also needed investigating PiXL for hyperopic correction and in pseudophakic eyes, and there is hope the procedure might eventually be used for astigmatic correction.

Dr. Elling is a consultant for Avedro.

Dr. Lim has no relevant financial interests to disclose.