Houston—Use of intravenous corticosteroids in the acute management of pediatric orbital cellulitis with subperiosteal abscess did not have an adverse effect on clinical outcomes and may be beneficial, according to Michael T. Yen, MD.

Dr. Yen based his conclusions on a retrospective review of 23 patients at Texas Children's Hospital; 12 had received IV corticosteroids (dexamethasone) and 11 had not. He is assistant professor of ophthalmology, Cullen Eye Institute, Baylor College of Medicine, Houston.

Dr. Yen noted that there were several problems with the study format.

"One of the limits of a retrospective review is that there is no standardized treatment protocol," Dr. Yen said. "We had patients receive a variety of dosages in a variety of frequencies ranging from 0.3 to 1 mg/kg and ranging from a single dose up to 7 days of IV dosing."

He added that due to the retrospective nature of the study, standardized criteria for evaluating the patients' progress were not available.

"When we reviewed the charts of the patients who received IV corticosteroids, several patients remained in the hospital for 2 or even up to 4 weeks without any apparent reason except that it was the customary treatment protocol for orbital cellulitis," Dr. Yen explained. "This may explain why we did not achieve statistical significance when comparing the average length of hospitalization between the two groups (p = 0.26)."

However, there was a difference between the two groups.

He also found that patients who received IV corticosteroids appeared less likely to need surgical intervention to drain the orbital access. The difference between these patients and those who did not receive medication approached but did not reach statistical significance. Surgical drainage was required in four of 12 patients treated with IV corticosteroids and six of 11 who were not (p = 0.20).

"We feel that our results are encouraging and perhaps suggest that a prospective, randomized trial is warranted to clarify the role of corticosteroids further in the acute management of pediatric orbital cellulitis with subperiosteal abscess," he said.

Sinusitis associated with orbital cellulitis with subperiosteal abscess in pediatric patients can be severe, leading to vision loss, cavernous sinus, or intracranial complications. All of these patients require broad-spectrum antibiotics, and many of these abscesses will resolve with medical therapy alone, according to Dr. Yen. 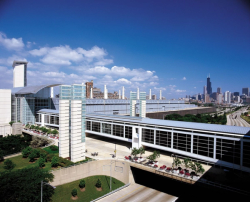