Medicare’s 2023 fee schedule includes cuts in reimbursement, which some groups say could lead to reduced access to care to patients who need it most.

According to the 2023 Physician Fee Schedule, released this week by the Centers for Medicare and Medicaid Services (CMS), physicians are likely to see a 4.4% cut in Medicare reimbursements, a number that could increase to as much as 8.4% when other cuts are added into the equation.

The American Academy of Ophthalmology (AAO) is working with the American Medical Association (AMA) and the Surgical Care Coalition (SCC) to press for Congressional action to derail these cuts, and these groups are expressing strong opposition to the updated PFS.

“The final rule comes amid surging medical inflation and staff retention challenges practices are experiencing across the country,” said George Williams, MD, AAO’s senior secretary for advocacy, “As the value of Medicare physician payments continues to plummet on an inflation-adjusted basis, the cuts will further diminish the financial support which surgical practices around the country rely on at a time when they need it most.”

Douglas Rhee, MD, president of the American Society of Cataract and Refractive Surgery also was critical of the announcement, pointing out in a statement that millions of beneficiaries depend on Medicare to access sight-saving and sight-restoring procedures that are critical to improving their livelihoods and quality of life.

“Further cuts to reimbursement are unsustainable,” he said in a statement. “Congress must act now to stop the cuts to ensure seniors continue to have access to medically necessary procedures.”

“Unless Congress acts by the end of the year, physician Medicare payments are planned to be cut by nearly 8.5% in 2023…which would severely impede patient access to care due to the forced closure of physician practices and put further strain on those that remained open during the pandemic,” he said.

In a press release, CMS said it is “finalizing proposals to incorporate advance shared saving payments to certain new ACOs that can be used to support their participation in the Shared Savings Program” including hiring more staff or addressing the social needs of Medicare beneficiaries. It will also allow ACOs to remain longer in financial tracks without downside risk, and include ACOs’ health equity performance in their quality scores. The agency says these steps are part of its strategy for having all traditional Medicare beneficiaries in an “accountable care relationship with their provider” by 2030. 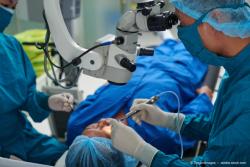