When first treating patients with acute chemical burns of the eye, one expert advises use of a buffering solution for irrigation rather than isotonic saline.

San Francisco-When initially treating patients with acute chemical burns of the eye, Claes H. Dohlman, MD, PhD, advised use of a buffering solution for irrigation rather than isotonic saline, which is ineffective according to German investigators. 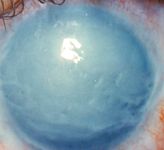 These recommendations were made by Dr. Dohlman as he delivered the Helen Keller Lecture at the annual meeting of the American Academy of Ophthalmology. Several changes in approach to treatment and rehabilitation in recent years are providing ophthalmologists with more options for diagnosing and treating chemical burns.

"There is nothing more discouraging for ophthalmologists than to see a child with an alkali burn," he said. "These burns result in a life of trouble for these patients and, previously, often irreversible blindness."

A borate buffer eye wash (Cederroth Eye Wash, Cederroth Industrial Products), however, is more effective than isotonic saline because it provides a high degree of neutralization even with a low flow rate.

Following irrigation, medications rarely result in clearing of the cornea, Dr. Dohlman added. He advised protecting the cornea with small doses of antibiotics and steroids but otherwise "forget about treating the cornea so intensely and allow the inflammation to calm down."

It is very important to pay attention to the IOP in the early period after the burn, during which time high spikes in pressure can be missed and the optic nerve can be damaged, Dr. Dohlman said. He advised keeping post-burn IOP around 10 mm Hg. If glaucoma medications fail to keep IOP low, a proprietary valve (Ahmed Glaucoma Valve, New World Medical) should be implanted early to keep IOP down.

"Much has changed with the introduction of relatively stable keratoprotheses," he said. "[This particular] keratoprosthesis can provide clear and stable media in most cases."

The device consists of a front plate, a back plate, and a locking ring-all of which are implanted in a corneal graft and sutured into the patient's cornea. Results with the device are "fairly good," Dr. Dohlman said. Cases of alkali burns still can be difficult, but patients with acid burns can achieve full vision, a result that is rarely achieved with a standard corneal graft, he said.

Dr. Dohlman recounted a group of 29 eyes with severe chemical burns. With the keratoprosthesis, retention of the device was acceptable, with replacement needed in six eyes. Despite achieving clear media, however, 21 of the 29 eyes had had a preoperative history of glaucoma with severe optic nerve damage and an additional three eyes developed severe glaucoma postoperatively.

Although use of the keratoprosthesis has resulted in a paradigm shift in the rehabilitation of severe chemical burns, ophthalmologists must concentrate on keeping the IOP low. Because it is difficult to measure IOP in patients who have sustained ocular burns, work is being done on implantable IOP transducers and more effective glaucoma shunts, Dr. Dohlman added.

"In patients with severe corneal burns, concentrate on preventing glaucoma rather than overtreating the cornea for the moment until the inflammation has subsided and the patient is ready for a keratoprosthesis," he said.