Caught between a husband and a wife: A cautionary surgical tale

In his debut blog, Dr. Packer writes of a cautionary tale to physicians when stuck between the wants and needs of married patients.

Editor’s Note: Ophthalmology Times introduces “Eye Catching: Let's Chat,” a blog series featuring contributions from members of the ophthalmic community. These blogs will be an opportunity for ophthalmic bloggers to engage with readers with about a topic that is top of mind, whether it is practice management, experiences with patients, the industry, medicine in general, or healthcare reform. The series kicks off with this blog by Mark Packer, MD, FACS, CPI, who travels a cautionary surgical journey with a husband and wife. The viewpoints expressed in these blogs do not represent the viewpoints of Ophthalmology Times and UBM Advanstar.

Dr. Packer"Old Hank" came to see me with a special request.  This was about 12 years ago, and he wasn’t really that old.  Also, his name was not actually Hank, but he had recently retired from truck driving, so he had the air of an old timer.  He had a respectable beer belly, spoke slowly, and repeated things a few times to make sure you understood them.

Further reading: What dying wishes or regrets do ophthalmologists have?

Hank had been driving a truck around the United States for more than 40 years.  His wife, Carol, had always stayed home.  Now that he was retired, he wanted to show her all the places he’d been while she was raising the kids.  He told me about the RV he planned to buy, and some of the routes he had in mind.  And there was one more thing.

“I am sick and tired of wearing bifocals,” he said, “and I don’t want to have to mess with glasses to drive or read maps.”

He had heard about Refractive Lens Exchange from an interview I had done on a local TV health program, and if the surgery worked for him, he wanted his wife to have it, too, so they could both enjoy the sights.

Hank was farsighted and had a small amount of astigmatism, so without his glasses everything, near and far, was a blur.  Otherwise, his eyes were healthy.  He didn’t have cataracts, and except for the big belly, he looked like he was in decent shape.

At the time Hank came to see me, in 2002, there was only one multifocal IOL available in the United States, the Array (Abbott Medical Optics).  The Array was pretty good, but it had a few features that required understanding.

The first feature was halos around lights at night.  Halos were fairly prominent with the Array, and a truck driver especially had to understand that there would appear to be circles of light around headlights and streetlights.  One driver, another man who got Array IOLs, told me he saw beautiful halos around the sunrise or sunset over the mountains in the desert.

In case you missed it: 5 unique ways to optimize care for glaucoma patients

Halos could be a significant bother, but the most interesting fact about the halos was always that people noticed them less over time. This process was then, and still is today, considered to be an example of neuroadaptation.

The second feature of the Array that had to be understood was that the center of the zonal refractive lens was focused at distance.  In bright sun, or a very bright room, when the pupil constricted, the near vision would get blurry because the near part of the lens was obscured by the pupillary margin.  This design led to the unusual experience of having to turn down the lights to be able to read.  Reading was actually better in dim light.

The third feature was really more of a non-feature.  The Array did not correct astigmatism, and any residual astigmatism after surgery hurt its performance (this is true of all multifocal IOLs – and as of this writing we still don’t have a toric multifocal IOL available in the United States, although we soon may (see http://1.usa.gov/1G0GSsd).   As a result, astigmatism had to be corrected in the cornea, either with relaxing incisions or LASIK, or both.  Hank had only a small amount of astigmatism, so I told him I could very likely eliminate it with relaxing incisions at the same time I put in his IOLs.

Hank’s surgery went flawlessly.  In keeping with his phlegmatic character, he didn’t get over-excited, but I could see he was satisfied with the results.  Next thing I know, he came back with his wife, Carol, wanting her to have the surgery.  But she had a very different story.

First of all, she was mildly nearsighted. When she took off her glasses she could see perfectly well at reading distance.  To me, as a surgeon, this meant that the most I could improve her was 50%-she already had half the battle won.  With her husband, Hank, the situation allowed more room for improvement: since he was farsighted, when he took off his glasses everything was blurry.  I could give him both distance and near vision.  All I could give her was distance.  She already had the near.

Second, she was diabetic.  Diabetes can cause a lot of trouble in the eyes, as you know: cystoid macular edema, endothelial cell loss and corneal edema, corneal epithelial erosions.  The recovery from surgery can take significantly longer.

Third, having surgery wasn’t her idea.  Hank brought her in and even answered questions for her.  She sat passively in the exam chair.  He had ample will for both of them.  Of course she signed the consent form, and knew what she was getting into, but the motivation was all his.

Carol got through surgery without any complications, but her vision remained blurrier than Hank’s had.  Because of her diabetes, she had mild subclinical CME and stayed on her meds longer than Hank.  At each visit he was very solicitous, very concerned about her results.  After they’d leave he’d come back and find me in the clinic, and ask again, “man to man,” if everything was going okay with her and if she’d get the results he had gotten.  I’d reassure him that it would just take longer but she’d get there.

After a while the swelling settled down and her vision improved, but she still didn’t think her near vision was as good as it had been before surgery.  The truth is, it probably wasn’t.  Before surgery, her eyes had both been in perfect focus at her reading distance.  Now she relied on the near focal point of the Array IOL.  Depending on the lighting, and the size of her pupil, only about 37% of the illumination on a page was transmitted by the IOL.  There was also a loss of contrast relative to what she had before surgery.

To be fair, she had passable distance vision without glasses.  She could have had the corrective lenses requirement removed from her driver’s license, but her distance vision, too, was not as crisp as she would like.  When I measured her vision, it turned out that she was still a little bit nearsighted.

Next: Stuck between a rock and hard place

Hitting the bull’s eye, Plano sphere refraction, occurred only about half the time with this type of IOL in my hands.  In another 45%, the results were close enough that everyone was satisfied.  However, in that last 5%, there was still enough residual refractive error to significantly blur the vision.  In these cases, I would consider an enhancement procedure (for a detailed review of enhancements, see Packer M.  Enhancements After Premium IOL Cataract Surgery: Tips, Tricks, and Outcomes; in Starr C (ed.),  Curr Ophthalmol Rep. New York: Springer Science + Business Media, 2013. DOI 10.1007/s40135-013-0031-3; http://bit.ly/1C4kIns).

Carol wasn’t terribly upset, but she seemed a bit uncomfortable with the idea of another operation.  She wasn’t gung ho about having more surgery, but Hank pushed that “if things can be made better, they should be made better.”

I explained that she was still slightly nearsighted.  If I corrected that nearsightedness there would be two effects:

1)   Her distance vision would be crisper, and

2)   Her near point of focus would be a little further away.

The trouble was she kind of liked where her near focal point was now.  It was just about where it had been before surgery, so it was a familiar place for her to hold her reading material.

He was driving more than a truck at this point.

NEXT: Figuring out what to do

There were a couple of ways her vision could be improved.  LASIK was one.  Piggyback IOLs was another.  After some consideration, I recommended the IOLs because Carol’s residual refractive error was purely nearsightedness-there was no astigmatism.  Had there been astigmatism in addition to nearsightedness, the enhancement would have required LASIK or PRK. However, diabetes impairs corneal healing, and on balance I thought LASIK probably carried a slightly higher risk.

Carol had her piggyback IOLs, and her distance vision did improve (although she once again had some CME that required eye drops for a couple of months).  By that point, I felt good about her results.  I considered her surgery a success, but her uncorrected vision still did not measure quite as good as her husband’s, and he remained dissatisfied with her results.  It was hard to tell how she felt about her vision. She didn’t really complain, but she didn’t seem happy, either.

Hank kept asking me why her vision wasn’t better.  I wasn’t absolutely sure, but when a difference amounts to just a couple of letters on the eye chart it can be hard to pin down a reason.  Hank could not be satisfied, so I had to run through my list of possible explanations over and over.

“The difference between her vision and yours is within the error of measurement-so there really is very little difference,” I told him.

The real problem was that he had been thrilled with his results, and she was just okay with hers.  To me, both results were in the sphere of technical success.

Finally came a moment when Carol and I were alone in the exam room.  This was a rare occurrence because Hank was always with her.

She said simply, “You know, doctor, I never wanted to have this surgery.”

We sometimes say, “Hindsight is 20/20.”  One of the responsibilities of a surgeon is to know when not to operate.  Despite technical success, Carol would never be truly happy with her results.

I didn’t dare ask if she was looking forward to traveling around the country.  I got the feeling she had been her husband’s passenger too long already. 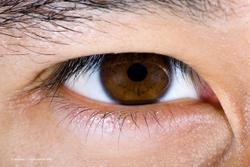