Calcified silicone lenses may be associated with asteroid hyalosis

Salt Lake City—A few cases of dystrophic calcification have been reported that required explantation of the patients' silicone IOLs because of the opacified posterior surface of the IOLs. The phenomenon seems to be associated with asteroid hyalosis, according to Liliana Werner, MD, PhD.

Deposits found In the three cases that Dr. Werner observed, the deposits were seen only in the area of the YAG laser capsulotomy, but in the Austrian case the deposits were also seen on the periphery of the optic covered by the posterior capsule.

Dr. Werner and her colleagues also analyzed a fourth case of dystrophic calcification of a silicone IOL in which the diabetic patient had bilateral asteroid hyalosis. The patient had undergone cataract surgery in 1994 on the left eye, which had a three-piece silicone lens implanted. She then underwent cataract surgery of the right eye in 1995 and received a three-piece hydrophobic acrylic IOL. She underwent YAG laser capsulotomy of the left eye in 1996 for possible posterior capsule opacification; however, there was increasing opacification within the area of the capsulotomy over the ensuing years. The right eye had no opacification, according to Dr. Werner.

Regarding asteroid bodies, the composition, origin, and mode of formation are controversial. She pointed out that some investigators have reported lipid-containing calcium compounds, and other studies suggested against a lipid character.

Dr. Werner also noted that YAG laser capsulotomy, which allows direct contact between the posterior surface of the IOL and the vitreous, accelerated the process of calcium precipitation-at least in two of the cases. 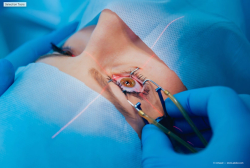