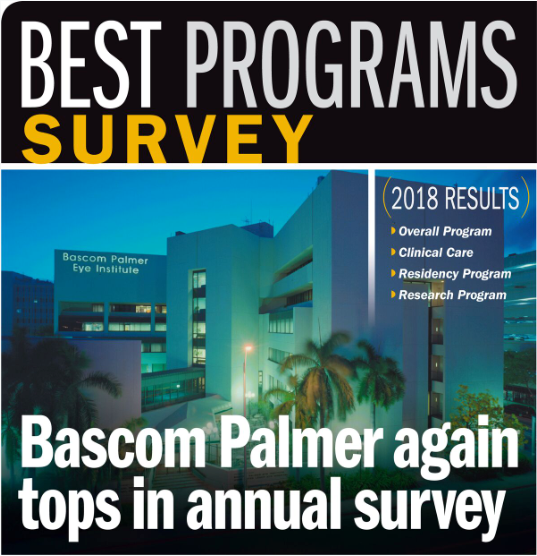 For the second year since Ophthalmology Times resumed its Best Programs Survey in 2017 after a brief hiatus, the Bascom Palmer Eye Institute at the University of Miami is at the top of the 2018 Best Overall Programs category, followed again by the Wilmer Eye Institute at Johns Hopkins University. Massachusetts Eye & Ear Infirmary at Harvard University is third, moving up from seventh place last year.

Of 232 chairmen and residency program directors invited to participate nationally, 58 did, for a 25% response rate. In interviews with Ophthalmology Times, the chairmen at the Bascom Palmer Eye Institute and the Wilmer Eye Institute expressed their appreciation for the commendation and shared some of their thoughts about what makes for a successful program today.

At Bascom Palmer, Chairman Eduardo C. Alfonso, MD, attributed his institute’s first place ranking in clinical care to the outstanding team that is there, including physicians, scientists, nurses, technicians, and more. About 1,200 people work at Bascom Palmer, he noted, making it one of the biggest eye care teams in the United States, caring for one of the largest patient populations.

“We continue to try to excel in patient care, vision research, and education, working to be at the cutting edge of innovation in all those areas,” he said. Bascom Palmer was one of the first institutions in the United State to offer the Nightstar gene therapy eye clinical trial for X-linked retinitis pigmentosa, he noted.

“A 23-year-old man from Puerto Rico was the first patient, and he gave a very heart wrenching interview as to how he was already beginning to feel the difference in terms of his eyesight and, more importantly, the promise that he will not continue to lose eyesight. It is quite remarkable,” Dr. Alfonso said.

He noted that Bascom Palmer has been at the forefront of the use of voretigene neparvovec-rzyl (Luxturna, Spark Therapeutics) to treat RPE65 mutation-associated retinal dystrophy, with The Wall Street Journal writing about their efforts in September (https://on.wsj. com/2DsPlLn).

“We treated a 9-year-old boy from Florida. This was thanks to the wonderful basic research and clinical team headed by Dr. Byron Lam. He and the whole group have been instrumental in advancing gene therapy,” Dr. Alfonso said.

“I am really looking forward to that day when we can stop giving them the monthly injections of anti-VEGF factors and be able to just do very specific gene therapy for them. Hopefully, that day will come soon,” he added.

Bascom Palmer continues to grow and will be adding more than 100,000 square feet of clinical space over the next five years or so, Dr. Alfonso said. This includes expanding throughout South Florida, as well as adding a facility in Abu Dhabi that is set to open in fall 2019. The institute is also working on growing in the virtual eye care space.

It is currently upgrading communications capabilities across all sites to have the bandwidth to facilitate image transfer and remote visits. For example, the Abu Dhabi facility will not have a full complement of eye specialists on site, but rather will augment the ophthalmologists who will be there with “super specialists” consulting from Miami.

“We want to make it easier for patients to not have to travel a long way when they need a procedure. In our new physical space areas, we are really not concentrating so much on patient exam rooms because I think (some examinations) will happen at the patient’s home. We will focus instead on spaces where patients will be physically treated, which requires a sterile room or equipment that cannot be deployed to homes,” he said.

How all of that develops will ultimately depend on if payment models can be shifted toward population health rather than treating diseases, he noted.

“We think we will be able to move a lot of care to patients’ own space, using devices they have with them, at home or at work,” he said. “We hope that will change how we provide care because keeping people healthy is a different paradigm.”

Dr. Alfonso noted that Bascom Palmer continues to build on its strong commitment to community service, internationally as well as locally. For example, the institute holds eye care health fairs almost every weekend in underserved areas around Miami.

The institute was also on standby to help after Hurricane Florence this summer, staying in communication with colleagues in the Mid-Atlantic Region in case they were needed.

“Fortunately, we weren’t needed, but we were ready to go if we were. And we keep in touch with our Caribbean and South American colleagues, because that is where needs tend to arise and the infrastructure is not available for medical responses to crises,” Dr. Alfonso said.

“We are available.” He also said that Bascom Palmer’s Philip J. Rosenfeld, MD, PhD, did a great service to the United States by going to Congress to discuss the cost of optical coherence tomography testing recently.

“He was able to save Medicare over $9 billion in healthcare costs,” he said. “That’s part of our community effort. Our faculty is not just looking at providing clinical care but is really out there at the national and international level being leaders and advocating for patients.”

Although enacting change in health care today is complex, he said Bascom Palmer is committed to pushing forward, especially in the area of caring for retinal degeneration.

Thanks to a $12 million gift from philanthropist Lois Pope, and support from others, Bascom Palmer is creating a one-of-a-kind building at its Palm Beach campus that is dedicated just to scientists and clinicians working on retinal and macular degeneration.

Education, another area of the Ophthalmology Times survey in which Bascom Palmer ranked number one, continues to be a growing area for the institute as well. It launched a Global Education Center this year to coordinate all of its educational efforts, including students, residents, and fellows, as well as patients who attend courses.

“We also provide our courses online, so our colleagues everywhere can benefit in their continuing medical education,” he said.

Bascom Palmer also now offers a unique master’s degree in Vision Science and Ophthalmology. Students come from all over the world to take this two-year program, he said. Many have finished medical school abroad and want to get a better background in ophthalmology, so they can embark on a research career, in industry or academia, or apply for clinical positions such as residencies and fellowships.

“It gives them the didactic basis that they may have not gotten in the country where they obtained their degree,” Dr. Alfonso said.

“We really found a need for this because we have such an international presence of observers and residents and fellows who rotate at Bascom Palmer and we clearly saw that they were in need of a core curriculum, so they could expand their careers.”

Research is backbone of Wilmer

“When Dr. Wilmer started the Wilmer Eye Institute in 1925, he felt that a focus on science was so important that having science throughout the institute would make us better doctors and better teachers,” Dr. McDonnell said.

“He created what was unique at the time-all-in-one-building, all-underone-roof, laboratories and scientists next to doctors, and patients next to students. Everyone mixed together.”

That was the first time such a thing had been done, he noted, and the vision behind it continues today. All faculty members at the Wilmer Eye Institute are tenure-track and are expected to do research, write papers, and advance the field, he said.

“We do our best to stay true to Dr. Wilmer’s vision of asking ourselves: Is the way we are doing things the best way, or is there a better way? That is the recipe for essentially taking better care of our patients and being better teachers to our residents and advancing the field of ophthalmology. It is the basis for our strong focus on research and why we spent over $40 million last year on research,” he said.

“Research is not a separate thing here. It’s throughout the institute,” he added.

Wilmer has just over 200 full-time faculty members, with 50 of those being PhD-level scientists who do not do patient care. It also has many clinician-scientists who see patients two or three days a week and spend the rest of their time in the laboratory or doing clinical research.

All residents are expected to do research as well, and they are motivated at least in part by a generous prize given each year to the one who does what the faculty judges as the most exciting work. Along those lines, Wilmer’s residency program is intentionally kept small-five per year-to enable the faculty to really focus on their complete development.

“Our goal is not to produce the largest number of residents, or to provide all the ophthalmologists for the state of Maryland. Our goal is to produce people who will be the leaders in the field,” Dr. McDonnell said.

“We have a map of the world in which we have highlighted all the places that people who trained at Wilmer have gone on to be department chairs. It’s now at 110.”

Dr. McDonnell also said that in the past two years, Wilmer faculty members have started six biotech companies to work on translating laboratory discoveries into new drugs and device.

“We think that partnering with an existing large company or creating a new company is the best way to do that,” he said, noting that the institute has a large partnership with German pharmaceutical company Bayer to develop several of its laboratory discoveries into therapies for retinal disease.

These ventures also include nanotechnology to replace glaucoma drops and cell engineering for optic nerve regeneration, he said.

Dr. McDonnell said that the Wilmer Eye Institute has expanded around Maryland in recent years to try to meet the ever-growing demand for its services.

“We are dealing with a demographic tidal wave in America of age-related eye problems,” he said. He proudly noted that every patient who has called for an appointment in the past three years was asked if they want to be seen that same day.

About 50,000 people have said, “yes.” Patients are not just coming from the area around Baltimore, he noted. The staff saw patients from all 50 states and 84 countries last year, he added.