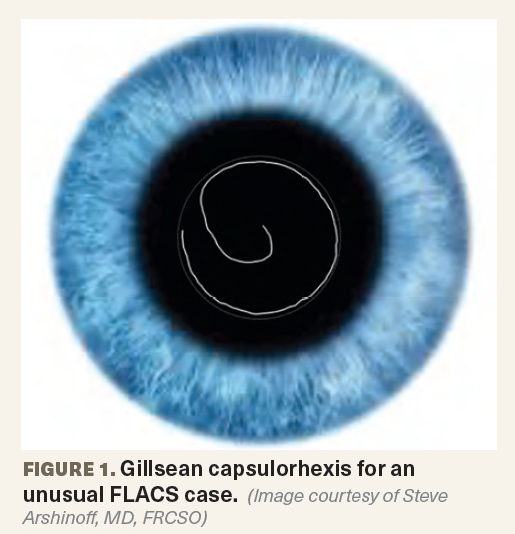 The selection of an ophthalmic viscoelastic device (OVD) for anterior capsulotomy should be based on principles of physics and take into account the pressure on the anterior surface of the anterior lens capsule, according to Steve Arshinoff, MD, FRCSC, professor in the Department of Ophthalmology and Vision Sciences, University of Toronto, as well as McMaster University in Hamilton, Ontario, Canada, Ben Gurion University in Israel, and Airlangga University in Indonesia.

Occasionally, new surgical problems appear that can be best addressed with a novel OVD technique. Specifically, anterior capsule tears have been reported to be more frequent with femtosecond laser-assisted cataract surgery (FLACS) than standard phacoemulsification, according to Arshinoff.

The Refractive Cataract Surgery Subcommittee of the American Society of Cataract and Refractive Surgery reviewed FLACS in 2013 and reported that the incidence of incomplete FLACS capsulotomies had been reduced from over 10% initially, to about 1% at the time of writing.1

Arshinoff noted, however, that a 2015 paper by Abell et al found, in a series of 4000 eyes, that the rate of anterior capsular tears was 1.84% with FLACS compared to 0.22% with standard phaco, an eight-fold difference that was highly statistically significant.2

“We were still seeing reports of a much greater frequency of anterior capsular tears in FLACS compared to regular phaco,” Arshinoff explained. “The question is: Can we solve that?”

The principles of physics can be applied to this problem, explained Dr. Arshinoff, noting that intracapsular pressure induced by the gas created in the femtosecond laser procedure results in the capsule being pushed radially outward potentially leading to increased outward pushing capsular stress and possibly a capsular tear.

“How do we get around it?” Arshinoff queried. “We should always first look back and see if we have dealt with a similar problem previously. The similar physical problem of Argentinean Flag Sign, seen with an intumescent lens, was solved using a viscoadaptive OVD to indent the anterior capsule, balancing the posterior pressure with anterior pressure against the capsule. This enables ‘Pressure Equalized Cataract Surgery’ (PECS) which prevents a tear-out.”

Arshinoff has taught this concept at OVD courses offered at the American and European Societies of Cataract and Refractive Surgeons, the American Academy of Ophthalmology, and Canadian Ophthalmological Society annual meetings for many years.

If a high-viscosity, cohesive elastic OVD is used to pressurize the anterior chamber, so that the pressure in front of the anterior capsule exceeds the pressure behind it, the usually convex anterior capsule develops a central concavity. In this situation, a capsulorhexis will always tend to tear centrally rather than peripherally, and the Argentinean Flag Sign will not occur, explained Arshinoff.

“There are multiple strategies that have been developed for dealing with the Argentinean Flag Sign, and every one that works, in a truly intumescent lens, does so by balancing the pressure in front of and behind the anterior lens capsule, essentially using some variation of PECS to stabilize the capsule before creating the capsulorhexis,” he said.

“The gas created by the femto in the capsular bag mimics Argentinean Flag Sign, but in this case, there really is increased intracapsular pressure,” Arshinoff noted. “It is solved as follows: once the femto part of the procedure is completed and the side port is made, the anterior chamber is irrigated with xylocaine-phenylephrine, making sure to maintain the anterior chamber pressure.”

“Subsequently, the main incision is opened and a very fine forceps, such as the Haldipurkar-Masket forceps, is used to depress and pull the capsular flap edges centrally and posteriorly toward the center of the lens to force the capsule to tear circumferentially and centrally, in a method similar to that first devised by James Gills for routine capsulotomy,” Arshinoff said, noting he has called the technique the “FLACS OVD Press” and published on it.3

But nothing should ever be done without assuring that the case in front of you is what the technique has been created for. Arshinoff described a very recent case where immediately after starting a femtosecond laser procedure, the patient jerked to the side, and the laser automatically turned off, leaving a very neat 4.6 mm circle of tiny bubbles indicating where the laser had made small perforations of the capsule, converting it into a serrated attachment of the cap to the peripheral capsule, similar to a postage stamp. Such a serrated junction is ideal for a tear out, Arshinoff added.

“The answer lies in analysis of the problem in terms of physics,” he said. “This case is unlike most FLACS cases because there is no intralenticular gas – the laser had turned off. However, the capsule has been damaged somewhat analogous to a necrotic, hypermature cataract capsule. Furthermore, unlike a FLACS case, the incision in this instance will have to be opened to permit manipulation of the capsule by a forceps for a prolonged period, much more like an Argentinean Flag Sign case than a FLACS case.”

In this case, Arshinoff depressed the center of the capsule using Healon5, a viscoadaptive, and then used a needle to begin a capsulorhexis centrally and spiraling outward. “As the flap approached the bubble circle, I took the forceps to gently depress and pull centrally, gradually going around the entire 360 degrees of the intended tear, in a ‘Gillsian’ capsulorhexis method, breaking all the ‘postage stamp’ attachments,” explained Dr. Arshinoff. “The case went flawlessly after that.”

Even with a highly effective and specific OVD approach to FLACS capsulotomies developed by Arshinoff, he noted that clinicians may encounter challenges depending on the case.

“A unique individual case may sometimes require analysis of the physical forces needed and the technique would then need to be modified to another OVD cataract surgical technique to achieve an optimal result,” Arshinoff concluded.