Artificial cornea: Future is in view

In the future, a range of devices will be available to restore corneal integrity and function.

San Francisco-In the future, a range of devices will be available to restore corneal integrity and function.

Dr. Jackson discussed the status of artificial corneas during refractive subspecialty day at the annual meeting of the American Academy of Ophthalmology.

Keratoprostheses maintain globe integrity, protection, and vision; are consistently available; and have good retention and results. They also have significant complications, although newer devices encourage better cell integration, he said.

Other types of artificial corneas are made by surface modification of synthetic polymers to improve host-cell integration or by using decellularization of corneal tissue.

"One of the exciting areas is self-assembled tissue equivalents, where keratocytes or dermal fibroblasts can be induced with vitamin C to secrete collagen and produce corneal stromas," he said. "We also can develop biomimetic regeneration templates or collagen scaffolds, and this is what we've been working on for the last 15 years at the University of Ottawa to promote regeneration of corneal tissue."

The scaffolds of these corneal equivalents consist of natural polymers made from recombinant human collagen Type I or III with a triple helical structure that gives them strength, stability, and persistence. They are produced by yeast and have no animal proteins, are biocompatible, and do not cause toxicity, inflammation, or immune response. Their major disadvantage is poor tensile strength that can cause biodegradation; tissue engineering is addressing this shortfall.

Dr. Jackson and colleagues in Ottawa are assembling scaffolds with recombinant collagen Type III and crosslinking them with a carbodiimide. They can be stiffened further by crosslinking with phosphorylcholine, producing an interpenetrating network. These collagen biosynthetic lenses have been produced in contact lens molds and tested in a series of animal models. 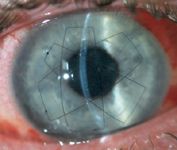 The implants were 500 µm thick and were placed in a 370- to 400-µm bed. The grafts, 6.25 to 6.75 mm, were placed in a 6- to 6.5-mm bed and anchored with three overlying sutures, which were removed at about 4 to 7 weeks. The patients were given antibiotic eye drops and topical steroids without preservatives three times a day for a mean of 6.5 weeks.

The sutures were removed at a mean of 5 weeks, and epithelialization occurred from 1 to 3 months in all but one patient, in whom it was delayed until 5 months postoperatively. One patient subsequently underwent successful phacoemulsification and implantation of an IOL. Vision improved in nine patients and was unchanged in one, resulting in a mean visual acuity of 20/50 at 12 months. There was no vascularization, rejection, or infection, and at 18 months vision had improved with less haze. Keratocytes were visualized by confocal microscopy migrating into the implants by 3 months, with the first signs of regenerating nerve fibers occurring between 3 and 6 months.

These biomimetic corneas can be implanted safely, he said.

"We know that rapid epithelialization is important, and we've got to have better ways of anchoring this material," Dr. Jackson concluded. "The future is to reinforce and stabilize, and possibly combine, concurrent delivery of drugs or bioactive factors with the implants."

Dr. Jackson does not have any financial interest in the products mentioned in this article but is an advisor to Cellular Bioengineering, which licenses the implant technology for corneal transplants.