Las Vegas-Ophthalmologists can use one of several modified strategies to perform cataract surgery in patients who are taking or have taken tamsulosin (Flomax, Boehringer Ingelheim Pharmaceuticals), with good outcomes and low complication rates, when they know of the medication history in advance, David F. Chang, MD, told those attending the annual meeting of the American Academy of Ophthalmology here.

Combining different approaches also can be effective, he said. Stopping the drug is of questionable value, and pupil-stretching should be avoided, he added. 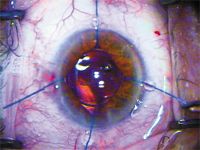 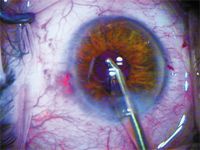 "We wanted the surgeons to be able to choose whatever strategy or combination they felt would be safest for their patients, so this was not a randomized comparison of different techniques in an attempt to see which was superior," Dr. Chang said. 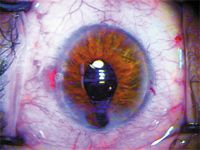 Surgeons tended to use hooks and rings in patients with smaller preoperative pupil diameters (mean of 5.8 mm and 4.3 mm, respectively), which usually are indicative of more severe IFIS, Dr. Chang said.

Thirty-five percent of all of the cases involved dense nuclei, he said. Seventy-five percent of the procedures were performed using topical anesthesia. "Most [91%] were done using a phaco chop method, which indicates that these were very experienced surgeons," Dr. Chang added.

Nothing unusual was noted about the distribution of iris color, diabetes, or pseudoexfoliation in the patient population.

Atropine as a single strategy was effective in only 42% (eight of 19) of the cases for which it was chosen, Dr. Chang said. In these cases, preoperative pupil diameter was very large (mean 7.2 mm) and decreased only slightly (mean 0.9 mm) by the end of the procedure. A well-dilated pupil at the start of surgery may indicate that the IFIS is less severe, he said.