Investigators in Australia are developing a new rapid screening test for glaucoma that could help advance early detection of the disease.

A new rapid screening test for glaucoma could help advance early detection of the disease, according to investigators.

Developed by a research team of engineers and ophthalmologists led by RMIT University in Melbourne, Australia, the test uses infrared sensors to monitor eye movement and can produce accurate results within seconds.

There are an estimated 80 million people globally with glaucoma, and more than 110 million are expected to be living with the disease by 2040.

Currently, glaucoma is diagnosed by ophthalmologists through a 30-minute eye pressure test. The new AI-powered test takes just 10 seconds to show if there is a risk of glaucoma, which investigators said makes it ideal for use in a national screening program.

“This research will allow a non-contact, easy-to-use and low-cost test that can performed routinely at general clinics,” he said.

“It could also promote a community-wide screening program, reaching people who might not otherwise seek treatment until it is too late.”

According to investigators, the technology differentiates between glaucoma and healthy eyes by analyzing changes in pupil size.

Investigators noted that in the study, pupils were measured 60 times per second using a commercial eye tracker.

Under ambient light conditions, patients looked at a computer screen while custom software measured and analyzed specific changes in their pupil size.

The software then compared the results against existing samples of glaucoma and healthy eyes to determine the risk of glaucoma.

Investigator Quoc Cuong Ngo, MD, a research assistant at RMIT, said the new tech was faster and better than any similar AI-based approach.

“Our software can measure how the pupil adjusts to ambient light and capture minuscule changes in the shape and size of the pupil,” he said.

“Existing AI glaucoma tests require the patient to be perfectly still for up to 10 minutes. Our tech does the job in 10 seconds, without compromising on accuracy.”

The team is now looking to adapt the technology to work with smartphone cameras instead of the eye tracker used in the study. 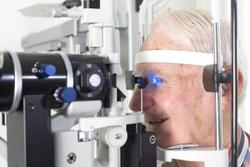 Understanding what is behind the trabecular meshwork