Las Vegas-A trial is under way to evaluate the role of anecortave acetate (Retaane, Alcon Laboratories) in risk reduction for age-related macular degeneration (AMD). Jason S. Slakter, MD, provided an update on the status of the C-02-60 Anecortave Acetate Risk Reduction Trial (AART) and the rationale for the use of anecortave acetate in preventing progression of non-exudative AMD to exudative AMD. He spoke on behalf of the Anecortave Acetate Clinical Study Group at the American Academy of Ophthalmology annual meeting.

Preclinical studies have indicated that the drug appears to have activity, in various steps along the angiogenic cascade, that results in a reduction of neovascular proliferation. The drug is administered every 6 months outside the eye in a posterior juxtascleral depot technique, he explained.

Dr. Slakter, who is clinical professor of ophthalmology, NYU School of Medicine, New York, focused his remarks on the role of anecortave acetate as a risk reduction agent, which he described as "a potentially more important role for anecortave acetate." 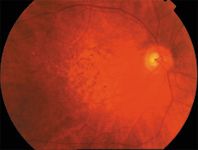 Considering the advent of the numerous new drugs for AMD, he presented the question, "Do we really need a risk-reduction agent?" He believes that there is a place for this drug in the armamentarium of retina specialists.

"The reality is that most patients who present with exudative AMD have already lost some vision. The baseline visual acuity levels in many clinical trials of the new AMD drugs are 20/80 to 20/125. Even if the new drugs provide a three-line gain in visual acuity in one-third or more of patients, there is still a large number of patients with exudative disease who have substantial loss of vision. If this can be prevented and good vision can be maintained, there is the possibility of enhancing our patients' quality of life," he stated.

In light of this treatment strategy, anecortave acetate is being evaluated in AART. AART, which began in 2004, is comparing anecortave acetate with sham administration to treat progression from high-risk nonexudative AMD to exudative, active, advanced AMD, Dr. Slakter explained.

The planned enrollment was a total of 2,500 patients randomly assigned to one of two active study arms in which either 15 mg or 30 mg of anecortave acetate was administered every 6 months compared with sham administration. The study will continue for 4 years. 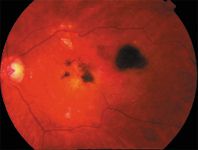 The patients who were enrolled had the highest risk of progressing to exudative AMD, according to Dr. Slakter. Patients had either five or more intermediate or large soft drusen or confluent drusen and hyperpigmentation in the macula in the study eye. The fellow eye, the eye not included in the study, had to have evidence of prior or active choroidal neovascularization.

"These patients have an approximately 50% risk of developing active exudative disease or advanced AMD in the study eye," he emphasized.