According to Thomas Aaberg, MR, the novel therapy is geared to treat rare, debilitating eye disease.

Serving as chief medical officer at Neurotech Pharmaceuticals, I get to be on the front lines and witness some of the company’s latest innovations, including the latest biotechnological advancement: an encapsulated cell therapy (ECT) for the treatment of macular telangiectasia, or MacTel.

MacTel is a bilateral, degenerative eye condition defined by progressive loss of the neurosensory retina adjacent to and ultimately involving the fovea. An age-progressive condition, with no known cause, it shows no preference based on gender, ethnicity, occupation, or any other known factor.

Initially, the disease was thought to be a vascular disorder of the retina. However, the most recent research suggests that MacTel is a disease of the Müller glial cells, which support and maintain the integrity and health of the retina. It appears that as Müller cells die off, photoreceptors and other retinal neurons go with them. Changes in retinal vascularity are a secondary result of the disease.

Patients with MacTel typically experience the first symptoms in their 50s or 60s, though the condition has likely been progressing for many years, even decades. The slow progression of MacTel results in the loss of about 1 letter of the Snellen visual acuity each year.

Early on in the disease process, patients experience the development of paracentral scotomas, or blind spots, that are most noticeable during activities such as reading. Their reading speed typically slows as letters and words fall into the scotomas and disappear from their visual field. Driving often becomes a source of anxiety, as patients lose confidence in their ability to see vehicles and other road hazards that enter their blind spots. 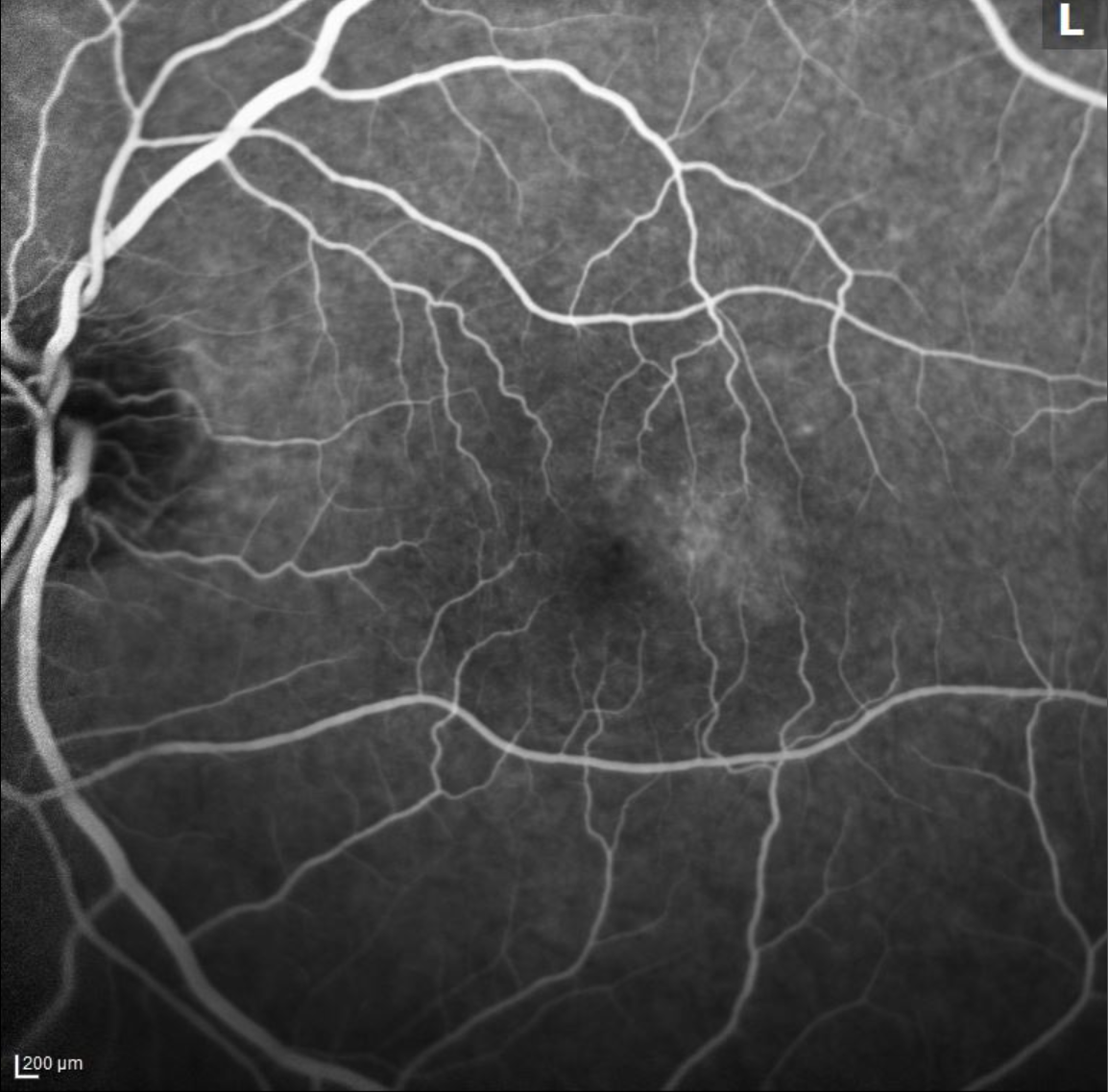 With the advent of OCT machines, we have been able to see other nearly pathognomonic findings such as cavitary changes in the parafoveal region (which are likely areas where the Müller cells and photoreceptors have atrophied) and breaks in the ellipsoid zone (Image 2). In more advanced cases of MacTel, intra- and subretinal neovascularization develop with associated subretinal and intraretinal fluid. 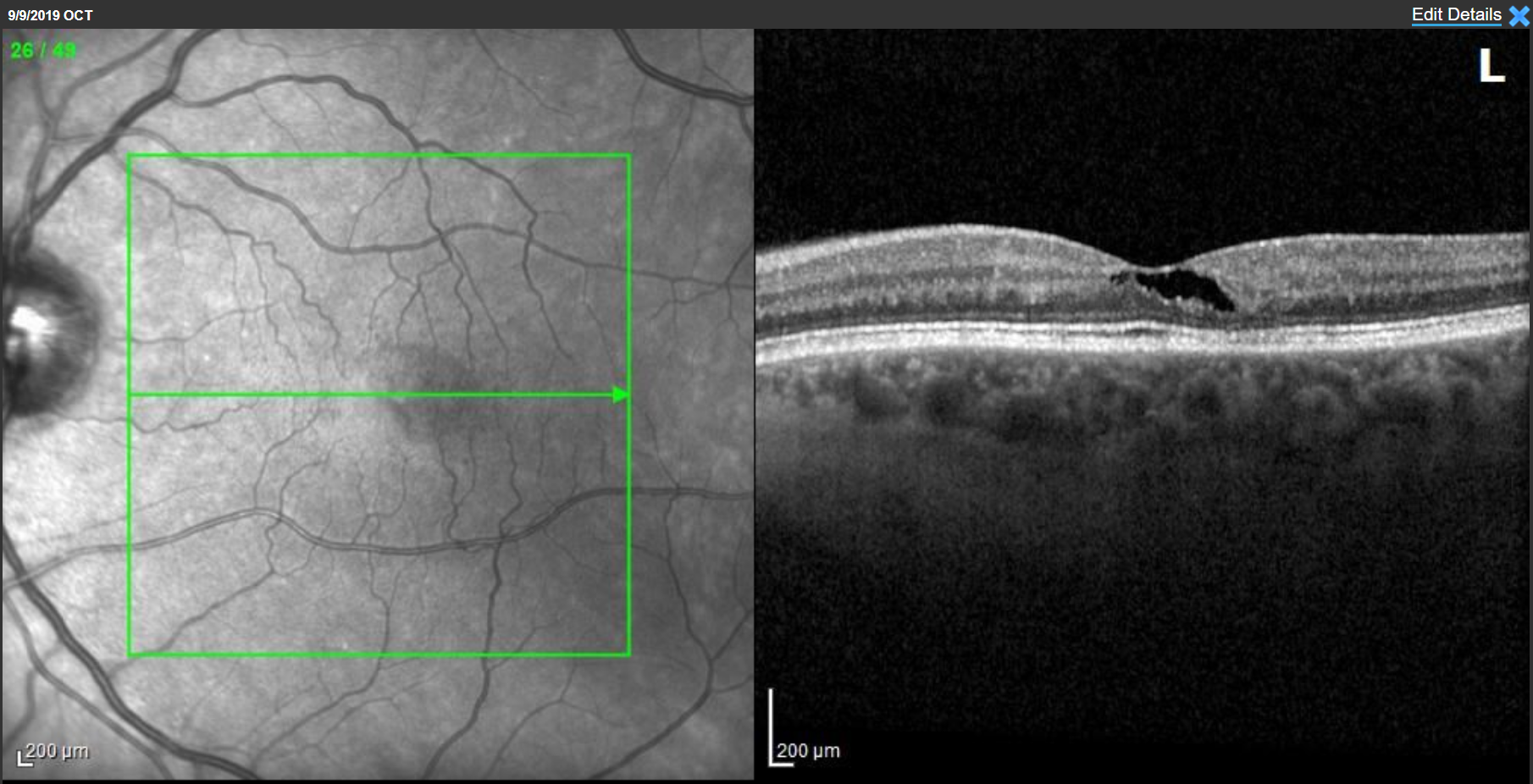 To arrest the progression of MacTel, clinicians have tried intraocular steroids and anti-VEGF drugs, but these therapies do not produce a durable response. The anti-VEGF drugs and/or careful focal laser photocoagulation have been shown to stop the neovascular complications, but neither alter the underlying disease process. In short, no approved treatment exists for MacTel.

The potential of ECT and CNTF

One of the principal jobs of Müller glial cells is to produce CNTF, which in turn supports the normal function of photoreceptors and is a powerful neuroprotector. It has been shown in mouse models that depleting these Müller glial cells leads to a loss of photoreceptors, development of vascular telangiectasia, breakdown of the blood-retinal barrier, and subsequent neovascularization. This process exactly mimics MacTel in humans.

Reintroducing CNTF to these mice models arrests some of these processes. It slows the loss of photoreceptors and the resulting downstream effects. The problem with CNTF as a therapy is that its half-life is just minutes long, so it must be constantly produced within the eye.

Consequently, unlike other injectable retinal therapies that require administering a drug once a month or at some reasonably prescribed frequency, CNTF would need to be injected daily or even many times a day. This is simply not feasible, but the goal for continuous production of CNTF led to the development of Neurotech’s ECT and the NT-501 device.

ECT utilizes an implantable device containing engineered human retinal pigment epithelium cells that are transfected with modified DNA plasmid. The sole job of that DNA plasmid is to direct the cells to produce a drug, protein, or peptide that is ultimately therapeutic. It is essentially like implanting a small drug factory or bioreactor directly into the eye. The NT-501 device can produce and release neuroprotective CNTF continuously, exactly where it is needed. 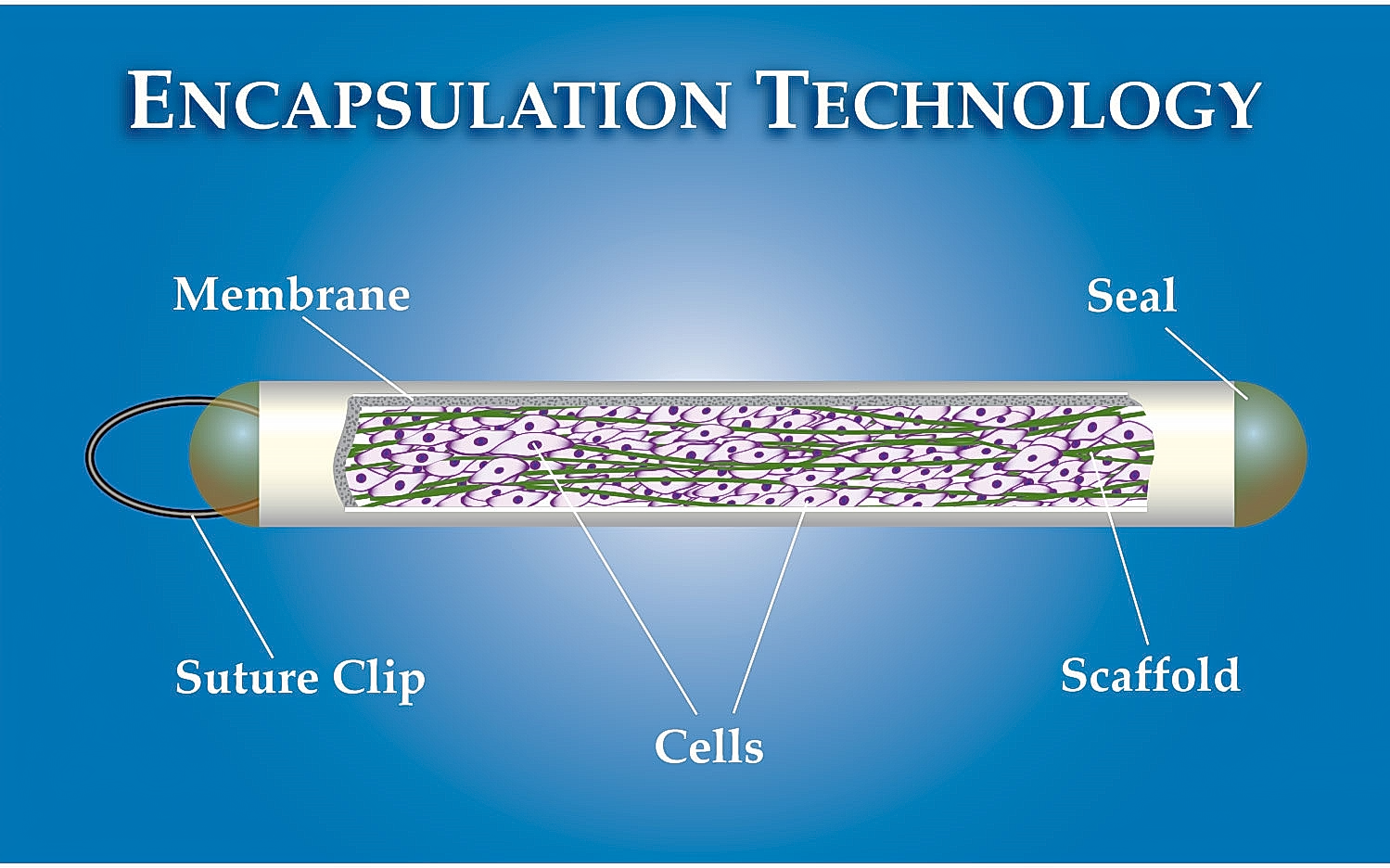 NT-501 (Figure 3) is about the size of a grain of rice, and once it is surgically implanted, patients cannot see or feel it. The pores in the device’s casing are precisely sized to allow nutrients to flow in and CNTF to flow out, but they block the patient’s immune system from seeing the drug-producing cells within. So far, this approach has proved exceptionally safe under intensive testing.

We are currently undertaking a phase 3A and 3B study and a bilateral study specific to MacTel. The trials are projected to be completed in the fourth quarter of 2022, and if the results are positive a product license application will be submitted for FDA evaluation.

NT-501 is also being tested for glaucoma therapy in an investigator-sponsored, 3-site study currently in a phase 2 extension study. The earlier clinical studies showed some positive signals, so we are eagerly awaiting final results.

I am incredibly excited about this technology and its potential to help patients with MacTel, who up to this point have had no hope for relief. If Neurotech’s NT-501 is approved for use, it will have been proved safe and effective in significantly slowing progression of the disease, adding perhaps years of useful vision for people facing a bleak future of diminishing eyesight.

Although our ECT treatment is designed for MacTel, the technology is highly customizable. It could be a game-changer for patients with a variety of retinal diseases and glaucoma. If we can bring this novel device across the finish line, the goal will be to investigate it for use in other areas of ophthalmology. More developments are sure to follow, and if MacTel is threatening you, your patient, or a loved one, I sincerely believe that hope is on the horizon.

P: 616-954-2020
Aaberg is chief medical officer at Neurotech Pharmaceuticals. He has no financial disclosures related to this content. He is a retina specialist with Retina Specialists of Michigan, and an assistant clinical professor at Michigan State University in East Lansing.